Now with over one hundred and eighty different miniatures the Sengoku range has expanded again with new models by John Bell for this month. Yokai, Creatures, Monsters, Samurai, Peasants, Scenics and much more.  This time six new single miniatures and a collected pack of them with a saving.  Go HERE for the range. 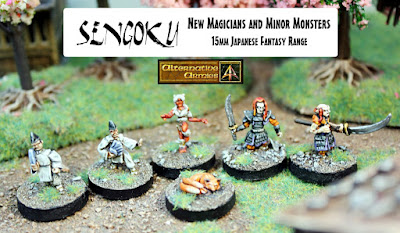 Great for any setting and game system to which they are suited including playing Monster Hunter. 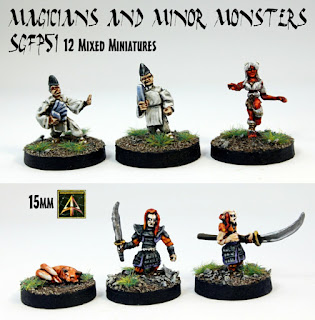 SGFP51 Magicians and Minor Monsters: This pack contains twelve evenly mixed miniatures.  Two different Onmyoko magicians, an Oni Princess, sleeping Kitsune Fox, Demonic Samurai and Lesser Oni.  A great mix of enemies and allies for your games of Sengoku Monster Hunter.  Taken from codes SGF179,180,181,182,183 and SGF184.  The pack offers a small saving off the single purchase of these codes.

Bases used in the pictures are 20mm round for scale comparison picture. Each of these new miniatures is in the range as a single code as well for maximum choice.  Go HERE. 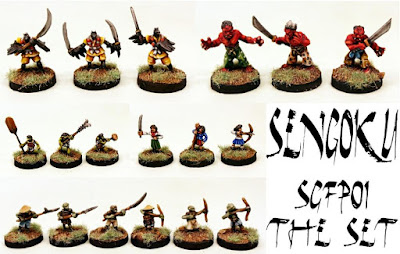 As the range has expanded we have gathered miniatures into bigger sets such as the first one SGFP1 Sengoku Set 1 which contains goblins, oni, tengu and kappa.  Each of these sets is maximum value with a saving giving an array of models for your table. If you purchase every Set then you have everything which has been released in the range.  We are currently in the midst of ninth push towards a Set.