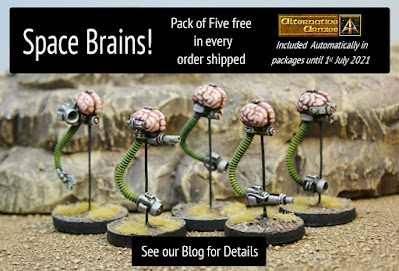 June begins and following the latest random dice roll to choose a free code for the month we present your gift. Space Brains! You need do nothing but place an order which requires to be shipping anywhere in the world (no Digital Download orders only sorry!) of any size and we will automatically include the EH03 pack of five miniatures.  As many orders as you want and ends 9am GMT 1st July 2021.  Go to the WEBSITE. 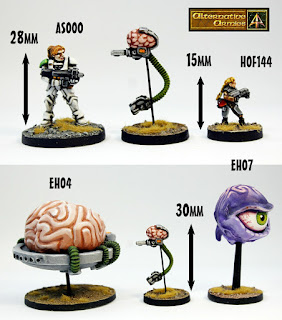 EH03 Space Brains: These are the enforcers of the mighty mind of the master brain and they use their death rays and metal claws to shoot down and control slave Humans and others. They are about 28mm tall end to end. These miniatures work in any scale of wargaming from 6mm to 15mm, 28mm and larger making them ideal in many game systems.  Five different poses. Go HERE.

Those who are long term customers of Alternative Armies know we like to keep the fun in wargaming and the hobby plus we like to reward our customers for spending their hard earned coins with it.  Each month there is a short list of codes taken from different ranges on the website and we roll a dice randomly choosing one as the free item.  This time it is a pack of five miniatures worth 10.00GBP and rather odd too.  There is a larger version EH02 Big Space Brain if you are keen to see it.  These free brains go great with Alternate Stars 28mm range, with the HOF 15mm range and perhaps with the 28mm Ion Age Range too. 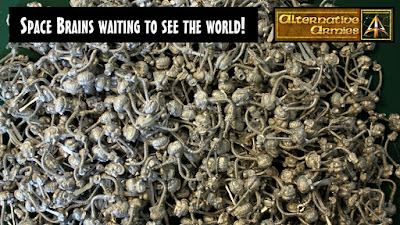 A near 1000 brains just made and being sorted into packs. There is much to look forward to this month.  In the World of Valon for Fintloque and for Slaughterloo there are two lots of news coming. The first is a brand new unit code for the Legion De Nain following up on the line infantry and return of the classic codes for these Dwarfs..grenadiers. The second is re-mastering and new molds for Orc Militia and an unseen now completed pack of Valon Villagers.  The Sengoku 15mm range has a new pack and single miniatures releasing featuring magicians and minor monsters.  Classic Tabletop and Asgard of the 1980's feature as we expand 25mm science fiction once more with Thulgs and the One Eyed Glax.  Our brand new 15mm scale army in the HOT Range will see a big code added for the Savage Lizardmen, a centre piece for the warriors. There is news on the 15mm Renaissance range with two new FURA value codes giving a saving and free bases included for Furioso plus a new release putting one of the most infamous chaps of early 16th century Italy onto your table in 15mm scale.  Lastly we are continuing our work on Laserburn and the Erin project is about a third done so there will be news on these when the time comes.