An enduring and favoured set of miniature tabletop gaming rules comes in the form of HOTT 2nd edition.  'Hordes of the Things' is generic and allows you to construct an army of 'points' from a list of troop 'types' with different sizes of 40mm frontage element bases.  Taken from our own HOT 15mm Fantasy Range and from the Tabletop Games 15mm Fantasy Range we have an array of ready made HOTT 2nd Edition 24AP Armies which include free bases.  Brendon Burnett over in Australia has kindly given us permission to show off his custom Dark Elf expanded Army made up from our miniatures as well as its composition list.  Over to you sir! 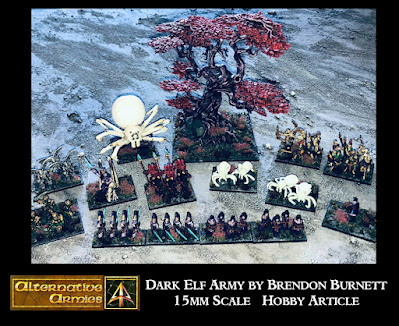 This dark host is composed of Dark Elves, lesser demons, the living dead, and all manner of slithering, swooping, creeping, crawling things.

Ever since I was young, I really enjoyed hobby miniatures. My Dad, my two older brothers and I would spend hours putting figurines together and playing games. Now, almost twenty years later, we’re all still bond over miniatures.

My favourite genre of hobby miniatures is high fantasy. I took an interest in 15mm figures by rediscovering Hordes of the Things (2nd ed) (HOTT) tabletop battle game. For this, I am really impressed by the quality and detail of figurines in Alternative Armies HOTT 2nd. Ed. Armies, especially the army pack deals or HOT Fantasy Range under the 15mm Fantasy ranges tab on the left-hand side. All of the figures you see – except the tree Stronghold in the background – are from the Alternative Armies range. HOTT can be played in a range of scales. But I reckon 15mm lets you to build whole armies quickly at a fast pace but with beautiful detail.

I personally always liked the concept of Dark Elves: once proud and noble creatures that have become bitter and twisted by miserable histories and fell sorceries. Living in shadowy forests, or on lifeless mountains peaks, they depend on all manner of dark pacts and uneasy alliances to survive their bitter existence. 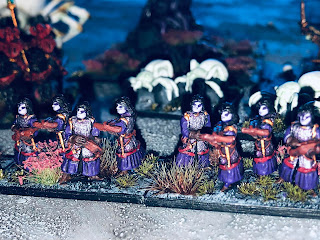 I organised this army around a number of themes: a small number of elves, bolstered by dark forest creatures, minor demons, serpentine servants, and the living dead. 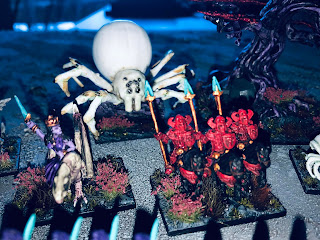 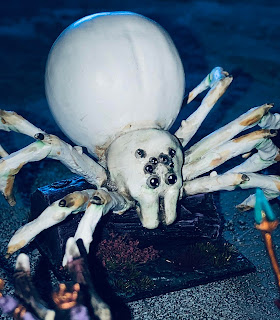 The Dark Elf Witch rides upon her fell beast, flanked by minor demonic knights. And somewhere behind her…… a spider queen is lurking hungrily.
The combination of unwelcoming elves flanked by all sorts of creatures of the night provided an opportunity for the imagination to run wild. That’s one of the most satisfying parts of the hobby: imagination. Being able to create your own story and represent it using miniatures is an incredible amount of creativity and fun. Furthermore, the catalogue at Alternative Armies has so much to choose from that I was literally spoiled for choice in this project with respect to providing the miniatures I needed to make this project as reality. 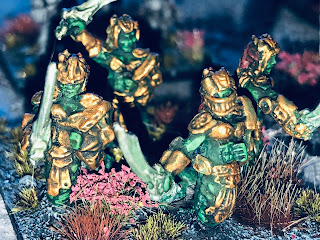 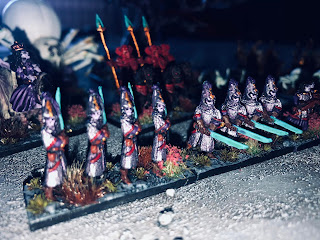 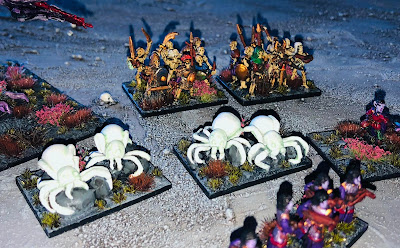 The ensorcelled undead (HOT14,40, 41,99) shamble up the line while slinking spiderlings strike from trees and holes in the ground. A rust effect is achieved on metal swords by using Citadel technical paints over Game Colour silver.

When deciding on what sort of army I am going to paint, I like to think of a theme. For this theme, it was Dark Elves, evil creatures and minor demons probably in a forest-like landscape (hence the basing). But perhaps you have other themes you would like to try, such as Human Paladins and knights or Dwarf Engineers and machines. The beauty of HOTT is the freedom to make whatever sort of list you want, so long as it is in the scale requirements for base size and model count.

The centre piece of my army is undoubtedly the Spider Queen, or Behemoth, element. Her majestic, pulsating, bulbous body and realistic gleaming eyes make her an object of terrifying beauty. Her body was painted with many thin layers of white paint with clear medium. Being inspired by internet research of white spiders, I painted her legs’ detail with green, sepia and black washes. Finally, the eyes of the beast were achieved simple a combination of black paint on the eye, two white dots on opposite sides of the eye, painting a ring of black wash around the outside of those eyes, and finishing off with a dab of gloss varnish on each eight eyes.

As for the playability of my army, it’s going to be a lot of fun with surprises. The Spider Queen behemoth can strike right into the centre of the board, flanked by strong Blades and the Aerial Hero. Shooters harass enemy elements into a position where my Knights can charge them down in the open. Hopefully, the Beasts quickly flank the enemy while the Sneaker goes through their ranks, causing chaos and confusion. Meanwhile the Skeleton Hordes are an expendable and resurrected distraction, while gargoyle Flyers may yet out maneuver the enemy lines. 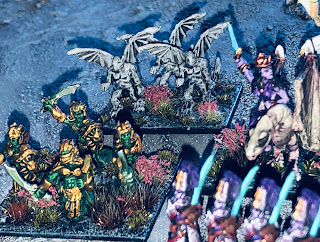 In conclusion, the main thing I can recommend about hobbying is exercising your imagination, not to mention building problem solving skills, social skills, and kinaesthetic skills. Think of your own list and themes and create the things that you like. It may just inspire a lifetime of creativity and fun.

Thank you for your time and we hope you enjoyed the read!