New 50mm Round joins our array of Bases for Miniatures

There are now thirty five different packs of bases for your miniatures or dioramas at Alternative Armies with the adding of 59029 50mm Round Base (Pack of Four).  These new bases are resin and we have other packs in resin as well as in metal and other materials too. 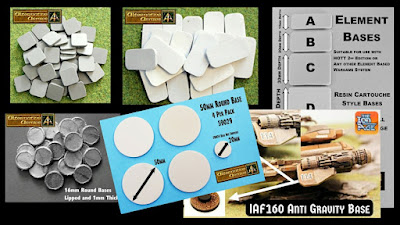 Go HERE for the entire range suitable for any game system.

Our bases go from 16mm round to 100mm round as well as 20mm square to 50mm square and include element bases for systems such as HOTT 2nd edition and Patrol Angis.  Some packs have a 'scale' in them where the more your purchase the bigger the saving and most packs have a 'buy three save 10%' option on page. 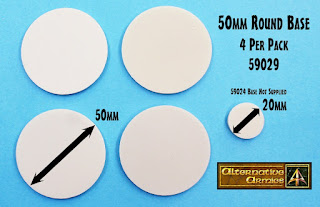 59029 50mm Round Base: This pack contains four identical Resin Bases of 50mm Diameter and a 3mm Thickness. These bases join all of our other rounds (20mm, 30mm, 40mm, 75mm, 100mm) and are ideal for use with 15mm and 28mm scale miniatures and are used for large monsters and war machines and vehicles.

One of the more exotic bases in the range is the IAF160 Anti-Gravity Base which allows you to mount vehicles or such upon it to have them 'hover' in the air on your gaming table.