The big release for the World of Valon this month is the Von Mohnblume Line sculpted by the talented Rob Alderman.  A new species of Dogman in the service of the Empire of Ostaria...Pugs! Dwarf sized Dogmen which we are offering on pre-order at 15% off the release prices for a week before the full release. Choose from single poses, a skirmish pack or a full unit.  For Flintloque and Slaughterloo. General release is on Tuesday 29th August 2017 and all orders will ship then worldwide. When full release occurs we will have a Uniformation article and more to show you. Go HERE or read on for more. 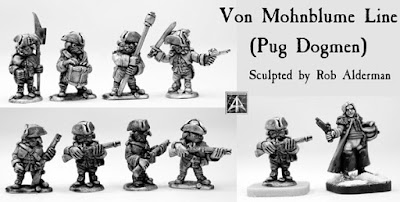 The idea for this new species of Dogman came from a conversation with their designer earlier this year and we both thought it would be an excellent idea to put these little terrors into the World of Valon.  Mr Alderman has a real Pug of his own which was a great influence upon the style and look of these eight new poses.  If the Von Mohnblume Line proves to be a success and interest is there who knows where it will lead.  An artillery crew, a command set and perhaps even in time a full Slaughterloo division of Pug Dogmen.

56595 Von Monhblume Line
This set contains 28mm white metal miniatures including an officer with Sword and Pistol, Musician with Drum, Sergeant with Pike, Standard Bearer and four different poses of Dogmen all with muskets.  Dwarf sized 'Pug' type Dogmen standing around 23mm tall.  A small dutchy within the Empire of Ostaria and in the service of the mad Emperor Klaffenhund.  Or you can use them to portray any one of the multitude of tiny stattes in the Confederation of Finklestein.  You can choose from a skirmish pack of ten miniatures (all eight poses with two additional random trooper poses), a unit of twenty miniatures (the skirmish pack with ten additional mixed trooper poses and a small saving) and single miniature choice booster for additional trooper poses.  Sculpted by Rob Alderman. Supplied with Bases. Go HERE. 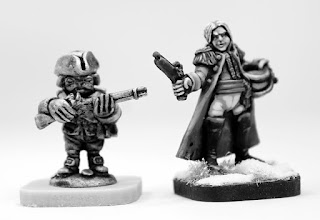 The image above shows a scale shot of a Pug Dogman next to an Elf taken from 5024 Escape from the Dark Czar beginners set for Flintloque. 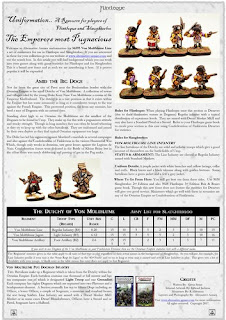 Next week we will be putting up a full and free Uniformation article for use in Flintloque and Slaughterloo which will give background along with statistics and more for this small dutchy so that you can use them in play.  This will be homed on the blog here and linked up to our dropbox.  It goes live the day all the pre-orders ship out. 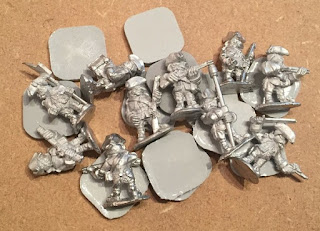 Chris Walkley is a long time impartial fan of Alternative Armies and was sent a sneak peek set of the Von Monhblume Line.  He has posted his thoughts along with his own now painted set on his Conflict Cornucopia blog.  You can go and read it HERE.  A real and honest review which I enjoyed a lot.