As many Flintloque and Slaughterloo players noticed over the past six weeks or so the Otharmann Empyre, land of the Sultan and the Othari, has been looking a little thin.  Some codes and units have not been on the website and stocks have run out of them with our partners such as Noble Knight Games (if you are in the USA check out our vast ranges with them online) the reason for this was sublime and fun too.  They have been replaced.  They have retained their contents but with changes from white metal to resin and from some models to new versions of them.  All of this updating was a part of our lead into the new projects for Valon but more on that later.  For now go HERE to see the Otharmann Empyre or read on for details and pictures of what is now here. 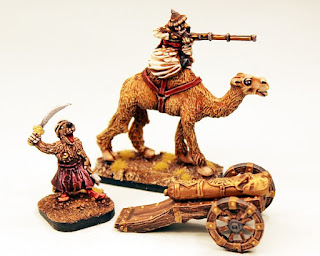 “Othari of the Otharmann Empire. The proud Ottermen control a vast Empire of mountains and endless sands. They ally themselves loosely with the Grand Alliance when it suits their needs, but they real enemies are the Ferach Empire forces in Aegypt and the numberless legions of the Dark Czar in the Odeatha region.  An army of a vast horde of troops more suited to the Darke Age than the Mordredian Wars topped with the elite Janissaries then the bulk of the Household warriors and then the enslaved Al-Hazrad.  A unique and colourful presence in The World of Valon.”

We have a brand new African Camel in 28mm scale in resin which you can purchase on its own and also now with two different riders one an Othari with Lance and the other an Othari with long Jezail musket.  We have reduced the price of these models to reflect the new medium of production.  Please note the Elf Officer shown in some pictures is there for scale and is not supplied. 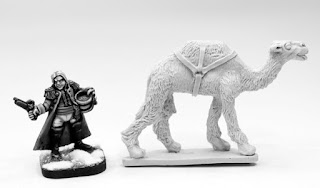 57026V African Camel
This pack contains one 28mm scale resin African camel which can be used on its own or with a rider or baggage in any game setting.  Go HERE. 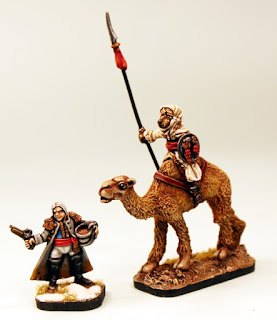 57026 Camel Lancer
This pack contains one white metal Othari Warrior with lance mounted on a resin Camel. This code requires assembly. The model when assembled stands 70mm tall from camel foot to the top of the riders head.  Supplied with a resin cartouche style base.  Go HERE. 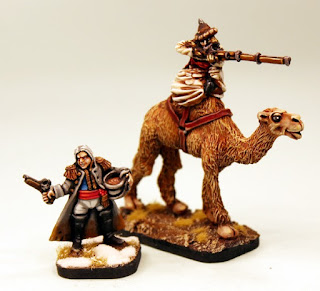 57027 Camel Jezail
This pack contains one resin Othari Warrior with long primitive musket mounted on a resin Camel. This code requires assembly. The model when assembled stands 70mm tall from camel foot to the top of the riders head.  Supplied with a resin cartouche style base.  Go HERE.

In addition to the new Camelry we have replaced the vicious Gnoll beast which the Othari use as a cavalry mount with a new resin version of the model which makes use of the existing riders.  Here are the codes. 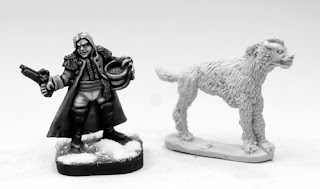 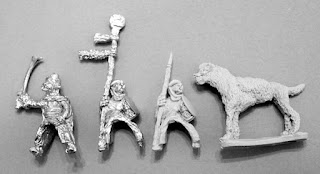 57023V Gnoll
This pack contains one fantasy 28mm Gnoll in resin which can be used as a beast or as a mount in any game system or such setting.  Go HERE. 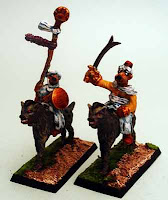 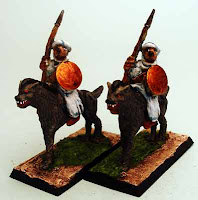 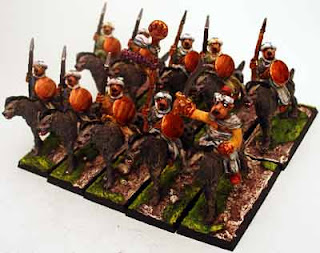 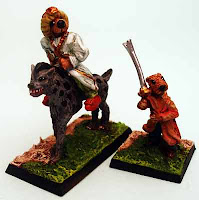 57003 Vizier and Guard
This pack contains a high ranking Othari mounted on a resin Gnoll along with an Othari Guard holding a two handed sword.  Ideal for leading your Otharmann army into battle!  Supplied with resin cartouche style bases.  Go HERE.

57004 Othari General
This pack contains an Othari mounted on a resin Gnoll.  Ideal for leading your Otharmann Division. Supplied with resin cartouche style base.  Go HERE.

In addition to the new Camel and the resin Gnoll codes we have updated the flying carpet rider now into resin as well with a price reduction to boot!

57025 Storm Rider
Riders on the Storm into this fray they are born. This pack contains one Othari Warrior armed with a spear and a bow along with a separate resin flying carpet and plastic flying base.  Assembly Required. Supplied with resin cartouche style base.  Go HERE.

The Otharmann Empyre makes great use of primitive cannon which fire huge stone balls at their Elvish and Undead foes.  We have updated the mighty Barking Dog Cannon with a resin body and a price reduction too! 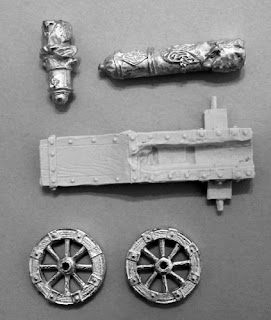 57500A Barking Dog Heavy Cannon
The Artillery of the Otharmann Empyre is known as the 'Barking Dogs'.  Big and slow cannons that often fire stone balls as well as iron.  This is a specialised artillery piece. One Othari archaic cannon body in resin with two white metal Wheels and a two different white metal Barrels (medium or heavy). One Massive Specialised Field Gun Kit. Suitable for use with any Othari Army.  Assembly Required. Go HERE. 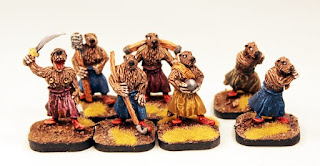 57500 Othari Gun Crew
The gunners of the Otharmann are poor by the standards of the rest of Valon but they are plentiful and make good use of their Barking Dog Cannons.  Limber Beasts are expensive so slaves pull the guns into position.  This pack contains an entire Othari Gun Crew of seven 28mm scale white metal miniatures.  An Officer, Rammer, Ball carrier, Spike, Water Carrier and two slaves.  You can add ropes to the slaves or use thread or metal wire (not supplied).  Supplied with resin cartouche style bases.  Go HERE.

Lastly if you are looking to get an entire Otharmann division onto the battlefield for Slaughterloo then look no further than the now updated divisional army pack (DAP) as detailed here.  Now with extra value!

57401 Otharmann Aegypt Division
An Othari Division that fights in the dry lands of Aegypt against the Ferach Empire. Players of Slaughterloo or those wishing to make a saving to get a big collection in one go will find excellence here. Save Approx 20% off list prices on this Division! An Entire Slaughterloo Division in a box.  Go HERE.

All Hail the Sultan! Thanks for Reading.