Adding Cavalry to my Witchlands forces by Andy Jefcoate

Well jingle my bells! The sixth in a series of linked Flintloque articles by Andy Jefcoate about his forays in the Witchlands and in Flintloque. If you missed the first to fifth articles where he got his starter set and then tried it out followed by a nail biter of a scenario and then get his Pug Dogs marching then you can read them on our blog HERE. In this article he expands with more riders. With pictures of his own painted collection. Read on and enjoy! GBS 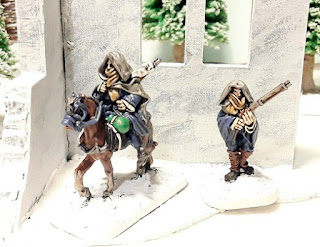 Adding Cavalry to my Witchlands forces

As I mentioned a couple of articles back, my Witchlands forces have been very pedestrian and would benefit from adding some cavalry. Not only are these units the fastest and often hardest hitting, they look great too!

Since I started wargaming several decades ago I've always thought that cavalry are great. There's something very dramatic about charging at the enemy on horseback armed only with something sharp (unless you are the one facing the sharp end of course!).

With most historical Napoleonic armies the majority of cavalry was usually fairly light, being used for scouting, seeing off enemy cavalry, attacking isolated units on flanks or pursuing enemies that break. I therefore feel that it should be the same with Flintloque with the majority of cavalry units filling these roles. However there are also some heavy cavalry units used as a hammer to smash a hole in the enemy forces. These are my absolute favourite units and I always like to give them a place in my forces, but that is something for another time after my forces have grown. 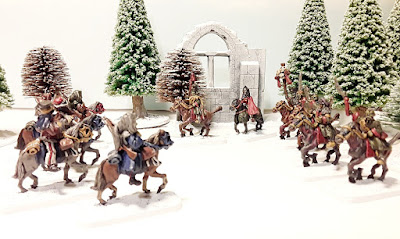 Initial cavalry choices
So what did I pick first. Well, as my Witchlands force already had Zombiski Cossacks on foot, I had to have some mounted Zombiski Cossacks. These fit perfectly with the scenario of harassing a fleeing army and appearing where the enemy least expects it. They are interesting models with an irregular look, although I gave them all green jackets to tie the unit together. I initially bought a unit of 5 as my games are still small but I'll expand the unit very soon. Having said that I did buy a mounted Vampyre to lead them. This was mainly because I liked the miniature but it also gives them more tactical options and additional punch in combat.

For the Ferach force I just had to have Elf Witchlands Cavalry. The background of these is great with remnants of various units banding together to fight back against their pursuers. These irregular cavalry are not quick to paint due to their varied uniforms but look very good and again fit in perfectly with the theme of a fleeing army. I bought a unit of 5 of them too so as not to make them too powerful a unit for a small game. 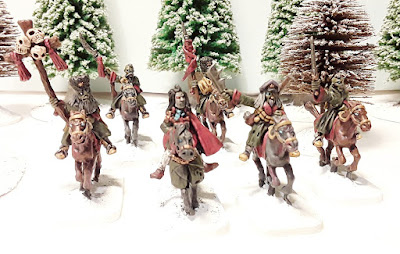 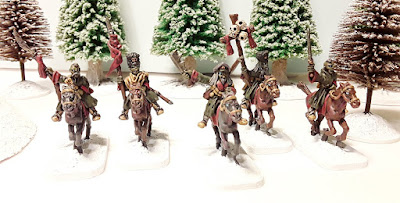 Dismounted Cavalry
All shots fired at mounted characters in Flintloque always strike the mount first (unless it is an aimed shot) as mounts are generally larger than their riders. This means that there is a high chance that characters will end up on foot after their mounts are shot from under them, especially if the scenario involves infantry and cavalry.

This was another reason why I bought the units I did. I already have 8 dismounted Zombiski Cossacks so I have more than enough to use if and when required. At the same time Witchlands Elf Infantry work perfectly with the Elf Witchlands cavalry as many of the poses and uniforms are similar. I therefore bought and painted several infantry figures to match the cavalry, meaning that all options are covered. 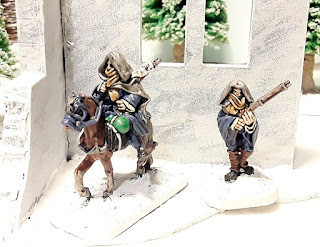 Continuing Narrative
This was easy as the Zombiski Cossacks had already been involved on foot, but some of their mounted brothers have now joined the pursuit of Saindoux's forces (despite the attentions of the Pugglesberg Jagers).

Elf Cavalry that are survivors of decimated units have also been drawn towards Saindoux's growing band. They are very welcome as they can scout further afield than the light infantry giving the general a better picture of the surrounding region. They can also help to defend the Ferach force against attacks by enemy cavalry.

Initial games involving cavalry
With Cavalry now being involved I've moved into using the full Flintloque rules as set out in the 'Death in the Snow' game book. My first game was cavalry only, with the Elf Cavalry having to stop the Zombiski Cossacks getting past them. This let me get used to using cavalry while the scenario was very simple.

I've since expanded into infantry and cavalry games with the cavalry operating on the flanks attempting to attack the flank of the opposing infantry while preventing their counterparts doing the same. This is good fun tactically with the games often becoming a swirling melee rather than 2 lines attacking and defending as can often happen with infantry only games. 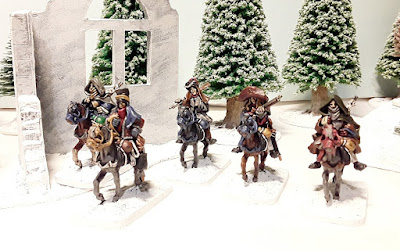 In Conclusion
It's good to finally have a combined arms force as it gives you many more scenario options and more tactical options during play. It looks great on the tabletop too!