Two new codes added to the HOF 15mm Science Fiction range for September 2018.  Our last release for the month at Alternative Armies.  Security Force Alpha (SFA) now has sleek powerful bikes to chase down targets in the city or on the battlefield.  These follow up on the SFA Portable Weapon Platforms with Gun Crew and the Tracked Bikes from previous releases and are great for any game system and fit right in with the rest of the array of the SFA. Go HERE or read on for more. 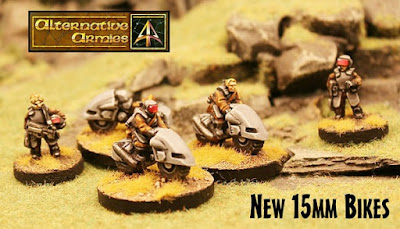 Alternative Armies has embarked upon expanding the Security Force Alpha (SFA) array of codes within the HOF 15mm Science Fiction Range in conjunction with prolific wargamer Fred Richards who has a vision of space colony warfare in the near future which we find captivating and wanted to get in on.  From the mind of Mr Richards and the guys at Alternative Armies comes the third release in this thread the Tracker Urban Bikes for your defence force as a part of Fred's vision for the future. 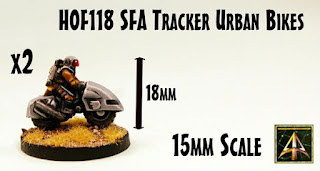 HOF119 SFA Tracker Urban Bike Command
This pack contains two resin 15mm scale wheeled bikes. One with a fully armoured SFA (Security Force Alpha) Trooper riding it bare headed.  One bike with no rider upon it. The bike is meant for high speed urban pursuit on Earth or any Colonial Planet and is armed with a side internal mounted projectile weapons.  It is at home in any near future setting. 5.00GBP per pack.  Go HERE.

In the previous two months we released three new packs into the range in co-ordination with Fred Richards which go with these new urban bikes.  See them all HERE.

HOF117 SFA Support Platform Platoon
This pack contains 15mm scale miniatures in high quality grey tone resin which are a part of Security Force Alpha (SFA).  Three different portable weapon platforms in kit form assembled from three pieces each.  A heavy calibre machine gun (0.50 Cal), an automatic grenade launcher (40mm) and an energy beamer (6kw). Six Human Gun Crew in equal number of two different poses both fully armoured SFA Troopers one standing and the other kneeling.  These heavy weapons are great for any setting.  Each platform has a footprint of 30mm across.  Supplied unassembled and unpainted and without bases.  All parts in this set (three platforms, six crew) are supplied on resin mounting blocks which you should remove with care and once you have the blocks make excellent concrete blocks in 15mm scale!  You can choose from the platoon pack or you can select one of the platforms only or a set of two gun crew only.  Select on the website page. 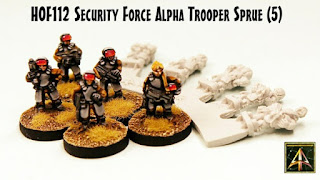 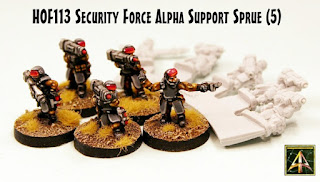 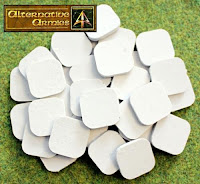 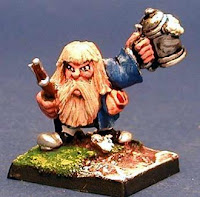 At Alternative Armies we have two week long deals on two entire ranges every week. Each offer is 10% off every code in an entire collections on the website.  Every pack, unit, box, book and so on in the collection is ten percent cheaper than its normal price for seven days.  It changes every week at midnight GMT Sunday so it is well worth a look to see what we have on offer from our vast array of miniatures.  These are well worth seeing every Monday.  This week the offers are on are the Dwarves of Krautia 28mm range for Flintloque and Slaughterloo and also on our Bases for Miniatures range which has metal and resin bases and element bases in great variety.

If you would like to get the latest news, releases, free content and unique to email offers from us in one place then sign up for our Mailchimp list which will get you future email from us every week with first news of new releases and special offers plus unique email only deals. Please go to our website and scroll down the home page past all the latest news right to the black bottom footer and enter your address in the box on the right hand side of the footer. We welcome feedback and you can contact us any time on sales@alternative-armies.com.  We can also manually add you to our mailing list if you send the email address to use to us giving us permission such as 'please add me to the list'.