A new code added to the HOF 15mm Science Fiction range for November 2018.  Security Force Alpha (SFA) brings the stompy in with a battlesuit kit fit for anything for low to high intensity warfare and also civilian construction and repair roles (six build options in the pack).  These follow up on the SFA Personalities and Dogs last time as well as  Tracker Wheeled Bikes and Portable Weapon Platforms with Gun Crew plus the Trencher Tracked Bikes from previous releases and are great for any game system and fit right in with the rest of the array of the SFA. Go HERE or read on for more. 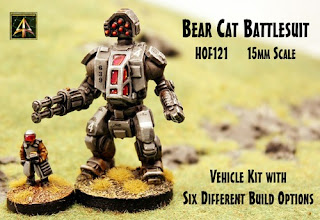 Alternative Armies has embarked upon expanding the Security Force Alpha (SFA) array of codes within the HOF 15mm Science Fiction Range in conjunction with prolific wargamer Fred Richards who has a vision of space colony warfare in the near future which we find captivating and wanted to get in on.  From the mind of Mr Richards and the guys at Alternative Armies comes the fifth release in this thread the multi-role battlesuit as a part of Fred's vision for the future. 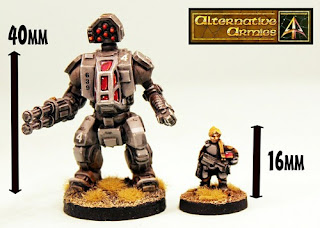 HOF121 Bear Cat Battlesuit
This pack contains one 15mm scale white metal and grey tone resin vehicle kit which can be outfitted in several roles.  The Bear Cat (known as the Hell Cat in its loaded for battle variants) is composed of a lower body part, an upper body part which includes armoured cockpit as well as a left arm ending in a fist and right arm ending in a wrist.   Fittings for that wrist supplied are a twin barrel rotary cannon, a large chainsaw and a large power drill.  There are also two supplied top mount weapon options a missile pod and a machine gun.  Assemble your battlesuit for war or construction work or as a scrapheap post apoc project.  Use the pieces left over for your bits box.  When built the Bear Cat is approx 45mm tall.  This code is supplied unassembled and unpainted and without a base.   It goes excellently with any science fiction force in 15mm scale.  Go HERE.  8.00GBP. 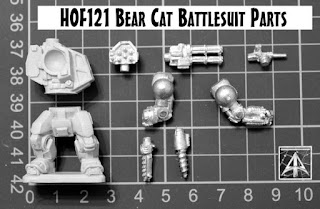 Above is a picture of the parts of this code as supplied.  A lot of variety!

Here are two examples of the Bear Cat.  The first in the colours of Security Force Alpha fitted out for war and the second is a space scheme for a battlesuit outfitted to break into moon domes.  Enjoy! 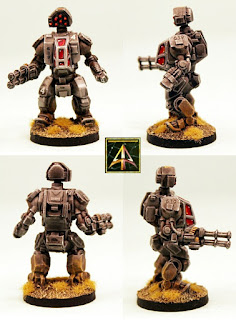 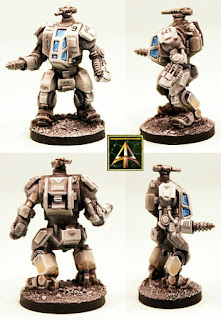 We are very lucky to have pro-painted examples of the Bear Cat from the legend that is Mastergunz over the USA.  His take on this battlesuit comes in two forms one for combat and the other for construction.  Here are his shots, all make from the kit parts and ain't they ruddy awesome! 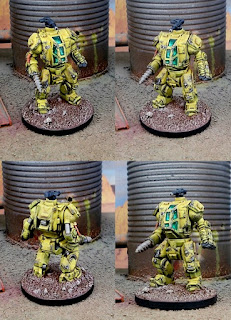 See you out there among the Colonies of Mankind in the HOF 15mm Science Fiction Range.

If you like this miniature awesome then you might want to check out our other 15mm sci-fi ranges.  A huge choice of new and classic as well as all manner of characters, infantry, vehicles, robots and more.  We also have a wicked cool 6mm range from Bradley Miniatures.  Click on the links to visit these ranges to see more.