First Look at the Pudigroan Dog Line and Casualty sculpts

It is our goal to release the first codes in the brand new Ruined Kingdom of Pudigrochumsberg army for Flintloque and Slaughterloo at the end of September 2015 with more following that. We are currently molding up the Pudigrochumsberg Line Infantry and also the Pudigrochumsberg Line Casualties to that goal but we thought we would show you the original sculpts of these great 28mm miniatures destined for white metal. Here are the codes, descriptions as well as images of the core infantry of this burned and blackened land: 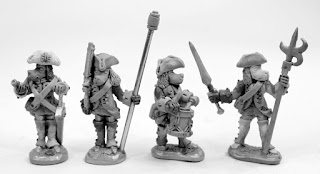 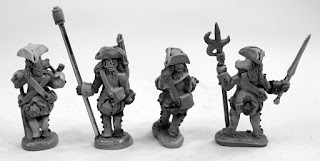 56589 Pudigroan Dogman Line
This will be a set of 28mm white metal Dogman miniatures which will give you the core regular troops to form your Line Infantry sections and units; the centre of your new force. These are meant for use with the rest of the coming Pudigrochumsberg packs but they will also serve well in Confederation of Finklestein collections and also revolutionary older style Ostarian Empire forces. Sculpted by our lead designer Sam Croes there are eight different models in this set and they will be available as a full unit (20) as well as a skirmish set (8) and a trooper booster (1) as well. As with all our Valon miniatures we will offer the additional choice of purchase pro-painted and based by our team of ladies here in Scotland.

The command poses are from left to right an Officer smoking a clay pipe with his hand on a sheathed sword, a Flag Bearer with standard pole and shouldered Musket, a Drummer beating the advance and lastly a Sergeant with drawn sword and an ornate spontoon as well. The trooper poses are from left to right walking with shouldered musket, advancing with musket, reloading musket and finally raising musket to fire at the enemy. These Dogmen are all 'poodle' types making them the same average height and bulk as an Elf and they use Standard Muskets. They would make an excellent skirmish section in their own right.

56123 Pudigroan Line Casualties
This will be a pack of 28mm white metal Dogman miniatures which will give you the sadly now demised casualty markers for the 56589 Pudigroan Dogman Line miniatures. As with those they will function equally well in the Confederation of Finklestein or older style Ostarian Empire forces. Sculpted by Sam Croes they will be available as a blister pack containing four randomly mixed poses. As with all our Valon miniatures we will offer the additional choice of purchase pro-painted and based by our team of ladies here in Scotland.

The casualty poses are from left to right a dead Dogmen in line uniform with musket laying face up tongue lolling and tricorne by his side and a face down Dogman in line uniform arm outstretched. These Dogmen are all 'poodle' types making them the same average height and bulk as an Elf and they use Standard Muskets. They would make excellent diorama or scenic objectives in their own right.

Look for these codes releasing end of September 2015 and there are many more to follow each of which will be previewed in a 'first look' article like this one. Our eventual aim is to make the Ruined Kingdom of Pudigrochumsberg army for Flintloque and Slaughterloo a totally complete one as we did with the Von Rotte Dwarf Legion at the start of this year. This means line infantry, casualties, light infantry, cavalry, command, artillery and more. Its an even bigger line up of releases than for the Von Rotte. Feel free to ask me questions on enquiries@alternative-armies.com. 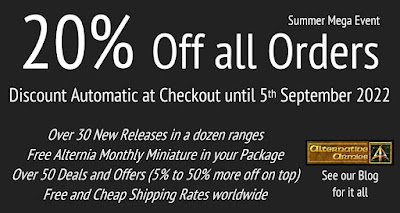