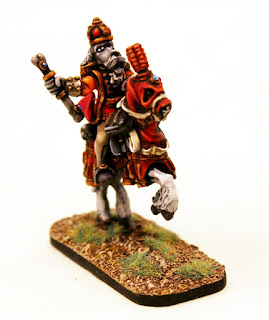 All hail the King!

The first Flintloque and Slaughterloo release into the World of Valon for 2016 at Alternative Armies is the supreme commander of the Army of Pudigrochumsberg. We present to you the big cheese himself the Dog King! We have Line Infantry, Casualties, Dragoons and the Light Infantry in the range for this army already. You can see them all on the Pudigroan page of our website HERE.

“In the Elves we have found allies to aid us in the burning of Ostaria. With our differences now behind us the Baron Von Rotte and your king have pledged our swords and our armies to this common purpose. Each of us with a strand or two of the dress that caused the Silage War and so many deaths. It is not to the Witchlands we will march but rather to Kartoffelberg and to Catalucia to fight the enemies of Mordred. As for I your monarch. I will be taking our finest and paying a visit to that mad tyrant Klaffenhund to give him a gift from a friend, to give him 'Cannisters of Pudigro from a Chum'. This I swear by Fidolfus!
King Bonio of Pudigrochumsberg 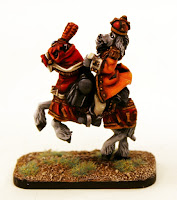 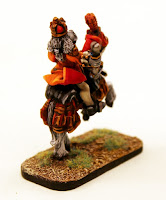 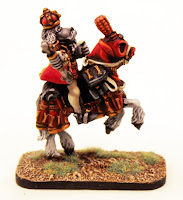 LE046 King Bonio
This code comprises two 28mm white metal miniatures released as a limited edition of one thousand numbered packs only. Two pieces the rider and the horse the commander in chief of Pudigrochumsberg. Meant for use with the Pudigrochumsberg Army units but they will also serve well in Confederation of Finklestein collections and also revolutionary older style Ostarian Empire forces. As with all our Valon miniatures we offer the additional choice of purchase pro-painted and based by our team of ladies here in Scotland. A mounted King wearing regal robes and carrying a gilded dog bone of royalty and wearing a crown. His horse is rearing up on its hind legs and is richly outfitted in harness and cloth. King Bonio is a 'Poodle' type Dogman making him the same average height and bulk as an Elf. Go HERE 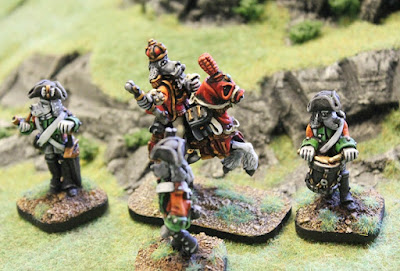 We have two more articles for you this month for Flintloque later in January. The first of these is a 'First Look' at the releases for February which will see artillery in the hands of Pudigrochumsberg and also a new artillery piece which is rather different! Secondly a free PDF insert for King Bonio giving you his background, uniform details and game rules for Flintloque and for Slaughterloo. Exciting!

Our eventual aim is to make the Ruined Kingdom of Pudigrochumsberg army for Flintloque and Slaughterloo in 2016 a totally complete one as we did with the Von Rotte Dwarf Legion in 2015. This means adding artillery, heavy cavalry, command and personalties as well as a whole Slaughterloo DAP box. Its an even bigger line up of releases than for the Von Rotte. Feel free to ask me questions on enquiries@alternative-armies.com.