This short article and its pictures are a treat for players of Flintloque and Slaughterloo.  The owner of this wonderful Dogman army in the pay of the Emperor Klaffenhund sent me these images last year and what with one thing and another it has taken me until now to show them off on our blog.  So without further ado  here is Simon Hutchinson's Ostarian Army.

Every image is followed by a short account of it and all the pictures were taken during a game of Slaughterloo in Australia between Mr Hutchinson and Mr Ward with his Orcish and Grand Alliance army (who took the day by the thinnest of margins I am told).

I think you will agree that the miniatures look lovely as does the gaming table with its terrain.  I really like the buzz and feel of the battlefield and it is to the players credit.  At the moment the Dog Army as shown consists of the following units and officers.

These are taken from the following codes if you wish to have a look on the Alternative Armies website and of course if you want Slaughterloo the rules you can have them as a digital download HERE.  LE020 Emperor Klaffenhund and 56510 Dogman Command.

Simon is planning on adding to this army as well as expanding out his Witchlands Undead army and more Ferach Empire too.  Big battles are ahead! 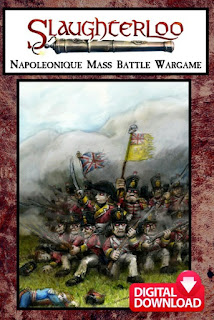 I wish to thank him for sharing these excellent pictures and the account of his Ostarian Slaughterloo Dogman army.