From the mad mind of Will Grundy at Grinning Skull Miniatures comes three new packs of Zarglian Invaders. Great for 28mm and 15mm games these alien creatures are all tentacles and exposed brains; armed with ray guns and mighty disintegration guns too. Two large characters, three warriors and five smaller warriors for a total of ten poses plus a super value collected all pack.  Near Future, Post Apocalyptic and Space Opera systems.  Great fun and there are now near sixty codes in the range including mutant chickens, killer plants, goatmen and the Oggum.  Go HERE or read on for more.

GRNP10 The Zarglian Invaders
This super value pack contains one of each of the alien Zarglians taken from codes GRN31,32,33 as well as GRN53 and GRN54 plus GRN55, 56,57,58,59 a mix of resin and white metal miniatures. Miniatures from the Grinning Skull Range. Suitable for use in any science fiction or post apocalyptic wargaming setting in 28mm or 15mm scales.  From 10mm to 23mm to 34mm tall.  Armed with fusion cannon, heavy ray guns and energy weapons.  Save 15% off the regular single miniature prices and get the whole set in one place.  Go HERE.

GRNP02 Zarglian Invaders
Pack of Five Miniatures. This value pack gathers together codes GRN31 to GRN33 resin miniatures for a total of five miniatures randomly but evenly mixed in terms of poses. A squad with a 10% saving off single miniature prices. Miniatures from the Grinning Skull Range. Suitable for use in any science fiction or post apocalyptic wargaming setting.  Approx 23mm in height.  You can also select single poses from this pack.  Go HERE.

GRNP07 Zargling Squad
Pack of Five Miniatures. This value pack gathers together codes GRN55 to GRN59 white metal miniatures for a total of five miniatures randomly but evenly mixed in terms of poses. A squad with a 10% saving off single miniature prices. Miniatures from the Grinning Skull Range. Suitable for use in any science fiction or post apocalyptic wargaming setting.  Approx 15mm in height.  You can also select single poses from this pack.  Go HERE. 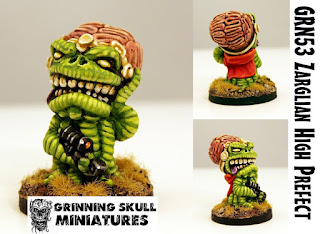 GRN53 Zarglian High Priest
This code contains one resin miniature.  The grand overlord of the Zarglain; the High Prefect.  Armed with an energy beamer.  Use it as your leader!  This miniature is one piece and is 34mm tall.  Go HERE. 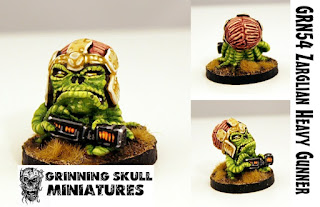 GRN54 Zarglian Heavy Gunner
This code contains one resin miniature.  The bringer of the bigger kill power.  Armed with a fusion cannon.  Support your squads with it.  This miniature is one piece and is 23mm tall.  Go HERE.

Who does not love such strange dangerous creatures eh!  Great for any game system which needs the oddity and invaders. Here are some scale shots showning these aliens alongside 15mm scale and 28mm scale miniatures from the HOF range and Flintloque starter box. 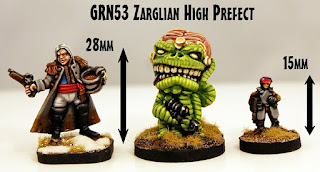 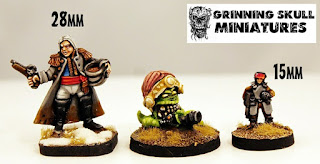 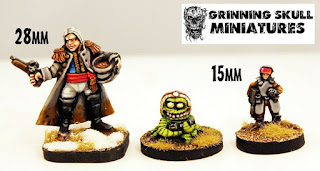 Here is an extract from the fiction by Will Grundy all about the Zarglians.

From the depths of space, the Zarglian invaders come with planetary dominion in mind. These tentacled marauders have arrived to dominate all other lesser lifeforms with their superior prowess and intellect, till all falls to the zarglian race. The Zarglian Stellar sovereignty spans countless worlds and systems, over centuries they have taken planet after planet and subdued many alien civilisations. Usually backwater worlds that offer little resistance to an invasion. Ruled by a ruthless royal line, much of their dominance can be seen as little more than a statement about how great and terrible they are (as can be seen by their huge heads!) It is the Zarglian way to assume that they are the highest form of life in the known galaxy, so humble is not a word they know how to use, and neither is subtle, favouring large displays of power just to show the enemy just how great they are and everything else is insignificant compared to their great empire.

Zarglians are identified by their two main striking features. First is their huge heads and massive pulsating fleshy brains. Often they choose to adorn themselves in elaborate head dress, to further extenuate just how big their brains can be. This is due to their custom of those who have the biggest brain, are usually more intelligent. Contrary to the fact, an average Zarglian is no more smarter than any other star faring race, they just imagine themselves to be. Even though the brain appears to be soft and squishy, it is quite tough and is not easily damaged as you'd think, this comes from millennia of evolution and adaptation , which without it, they would have died out a long time ago.

The other feature that distinguishes them from other creatures is the sea of writhing tentacles they possess as appendages. This makes them surprisingly fast and agile, able to do many things at once. It is unknown how many tentacles zarglians have exactly, experts would say that the number varies per being. With their like of racial superiority, it could be said that this might figure in a similar manner to the brain size. You'd imagine that due to their appearance they require a large amount of water to survive and that is why they seek new worlds to conquer. This is not the case, long have they evolved the ability to operate in many a locale and their tech aboard the saucer shaped crafts is more than adequate to provide them with all to survive. indeed their technology is advanced, lasers, sonic weapons, disintergrators and rayguns, as well as hyperspace capabilities and teleportation. They are ahead in terms of psionic ability, using mind bending telepathic devices to communicate to other races, probably just to taunt their foes and tell them of their impending conquest! So, prepare to serve your new intergalactic masters, and hail the great Zarglian Emperor and prepare for world wide invasion! 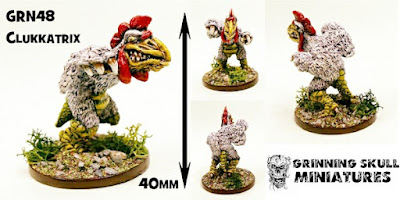 This is our last release for the month and we will see you in March for a bit or a Spring Clean!