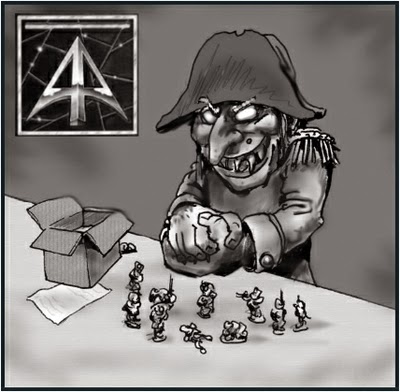 I have placed a synopsis of a Flintloque mega scenario titled 'Sharkes Farmhouse' over on our venerable and popular Yahoo Group - The Notables.  If you are interested in reading it, commenting and or contibuting on the thread or if you just like Flintloque or any other of our wargame systems please do click through.  If you are not a member you will be asked to join.  This is just a formality so say hi and I will join you to the group.  We are a friendly bunch.

Sharkes Farmhouse
Or – Will our Hero buy the Farm?
A Flintloque Mega Scenario for One to Four Players.
During the climactic and titanic battle of Slaughterloo there were dozens of smaller engadgements between the warring divisions as the Tyrant Mordred tried just one more time to put Urop under his heel. Among these smaller engadgements the struggle to hold the vital farm buildings of La Hesitant was paramount and comparable only to the blood bath of Hurtenblunt. Defended by detachments of the Krautian Giant Legion including skirmishers and by an escorting assortment of Rifleorcs led by Major Sharke caught in passing by the advance of Ferach troops. Will Sharke and his Orcs, with the help of the K.G.L Ogres, be able to hold against massed attacks by the Elves? Or will they crumble, the farm fall and the Armoricans be triumphant before General Pik-Tan can plug the gap?

Read the rest over on the group.

This great piece of artwork which depicts an Al-Garvey Goblin officer rubbing his hands in delight while looking at his latest box of goodies just delivered from Alternative Armies here in the real world.  Excellent!