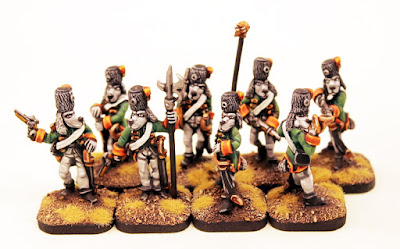 RACHE CARABINIERS
This formation of Dogmen fight with the Burrovians in Kartoffelburg and its their aim to kill every Ostarian they can find along with any who are their allies.  Experts in skirmishing the Rache can match anything the Grand Alliance can throw at them.  The structure this Light Troop battalion is as follows.  One  battalions composes the Regiment. One thousand Dogmen at full muster and  ten companies. Each company has one hundred Dogs which are separated into two Platoons and a headquarters element totaling about fifty soldiers and officers. A Section normally has ten to fifteen Dogs including an Officer, a lesser Officer, a Sergeant, a musician and standard bearer, the rest being Privates. They are armed with a Ferach Carbine and a Bayonet, Officers have a Sword. The uniform consists of a dark green tunic, grey breeches, a black shako with silver and an orange plume, black shoes. Facing colours (cuffs, collars, etc.) are dark orange. Equipment is black with equipment straps being of white leather.

56588 Rache Carabiners
This is a set of 28mm white metal Dogman miniatures which give you the light infantry and skirmishers for the sections and units of your force.  These are meant for use with the rest of the coming and exisiting Pudigrochumsberg packs but they will also serve well in Confederation of Finklestein collections and also revolutionary older style Ostarian Empire forces.  Sculpted by our lead designer Sam Croes there are eight different poses in this set and they are available as a full unit (12) as well as a trooper booster (1) as well.  As with all our Valon miniatures we will offer the additional choice of purchase pro-painted and based by our team of ladies here in Scotland. Go HERE. 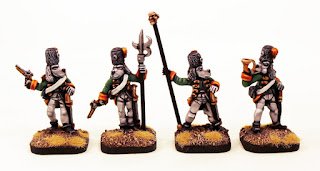 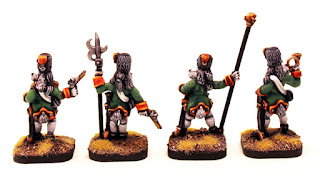 The poses are beginning with the command poses, an officer holding a pistol and hand on sword hilt. Then a musician blowing a horn, a standard bearer whose pole has a stylised metal Elf Head on its top and a sergeant with spontoon and pistol.  The Trooper poses are advancing, loading, marching and lastly taking aim.  All are armed with short carbines and wear a 'Hungarian' style bearskin along with carrying a sword.  The Carabiniers are skirmishers that often act alongside Dragoons using the same equipment and weapons.  While they lack the long range hitting power of some Light Infantry they are better armed for and more skilled in melee combat. These Dogmen are all 'poodle' types making them the same average height and bulk as an Elf.  They make an excellent skirmish section. 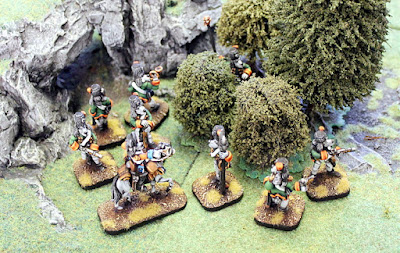 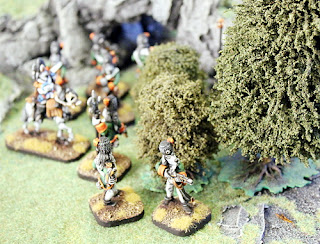 Our eventual aim is to make the Ruined Kingdom of Pudigrochumsberg army for Flintloque and Slaughterloo a totally complete one as we did with the Von Rotte Dwarf Legion in 2015.  This means line infantry, casualties, light infantry, cavalry, command, artillery and more.  Its an even bigger line up of releases than for the Von Rotte.  Now that we have Line Infantry, Infantry Casualties, Light Cavalry and Light Infantry our first new year release will be a limited edition the monarch of Pudigrochumsberg see HERE.  We will then move on to the heavy hitters but more on that in January. Feel free to ask me questions on enquiries@alternative-armies.com. 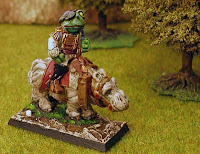 Lastly this message will be across all news and releases this month.  All Flintloque or Slaughterloo orders this month (containing one or more codes from the World of Valon) will get a free 56111 Mounted Todoroni Officer (worth 6.00GBP) automatically included read about this HERE.

We also have Todoroni Hussars at half price to celebrate their now resin baby hippo mounts plus a discount on Todoroni gunners and indeed the entire Nepolise Slaughterloo Division box.  This is our last release of the year and we wish you all a Merry Cryptmass!