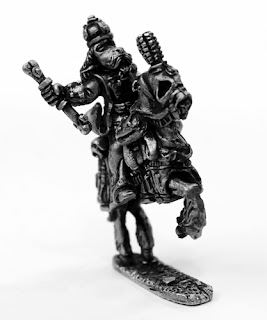 “They are a burned and blasted race and that is why we will have them in our ranks. My soldiers fight for me, for the eagles at their fore, for the promise of a future owned by us. But these troops will die and die fighting savagely for they have a hatred in them that we lack. They would kill every Ostarian ever littered. And that...that suits my purpose.”
The Emperor Mordred on the troops of Pudigrochumsberg

Welcome to the first look article for the first 2016 release in the Ruined Kingdom of Pudigrochumsberg army for Flintloque and Slaughterloo. This new code will be released in January and follows up on the Line Infantry, Casualties and Dragoons (and the Light Infantry!) in the range already (as of the 8th). You can see them all on the Pudigroan page of our website HERE. We want to show you this time the big cheese, the Dog King, as an inked up master tin hot out of the mold. Here is the code, description as well as images of the deposed monarch of this burned and blackened land. King Bonio of Pudigrochumsberg! 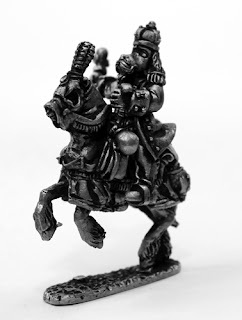 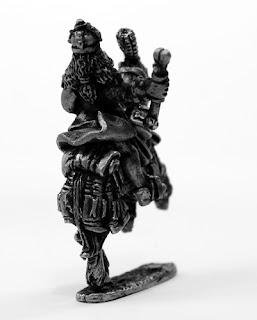 LE046 King Bonio
This will be a single code of 28mm white metal miniatures released as a limited edition of one thousand numbered packs only. Two pieces the rider and the horse sculpted by our lead designer Sam Croes this will be the commander in chief of your new force. Meant for use with the rest of the coming Pudigrochumsberg packs but they will also serve well in Confederation of Finklestein collections and also revolutionary older style Ostarian Empire forces. Available as a numbered pack. As with all our Valon miniatures we will offer the additional choice of purchase pro-painted and based by our team of ladies here in Scotland. The pose is a mounted King wearing regal robes and carrying a gilded dog bone of royalty and wearing a crown. His horse is rearing up on its hind legs and is richly outfitted in harness and cloth. King Bonio is a 'Poodle' type Dogman making him the same average height and bulk as an Elf.

Our eventual aim is to make the Ruined Kingdom of Pudigrochumsberg army for Flintloque and Slaughterloo a totally complete one as we did with the Von Rotte Dwarf Legion in 2015. This means line infantry, casualties, light infantry, cavalry, command, artillery and more. Its an even bigger line up of releases than for the Von Rotte. Feel free to ask me questions on enquiries@alternative-armies.com.