April is a big month for Alternative Armies every year and on top of our annual Salute Season which sees free shipping worldwide (on all orders over 10.00GBP until 18th April) we have new releases for Flintloque and Slaughterloo...the final codes and divisional box for the Army of Pudigrochumsberg!  These three releases are 56587 Pudigroan Command Set, 56592 Cruellest DeVille Cuirassiers and 56604 Pudigroan Dog Division (DAP) and all of these are now on our website HERE.  The whole army is now complete and released! There are three articles and news items one for each to give each of them their proper worth and place but if you want to see all of them now just click through.  Read on for more on the Pudigroan Command Set!

56587 Pudigroan Command Set
A set of 28mm white metal Dogman miniatures which gives you the foot and mounted officers in all units for your new force.  These are meant for use with the rest of the Pudigrochumsberg packs but they will also serve well in Confederation of Finklestein collections and also revolutionary older style Ostarian Empire forces.  Sculpted by our lead designer Sam Croes there are eight miniatures in this set four on foot and two mounted on horses.  This is a set and you can also purchase a single foot officer as well as a drop down menu choice.  As with all our Valon miniatures we offer the additional choice of purchase pro-painted and based by our team of ladies here in Scotland.  Price 18.00GBP. Go HERE. 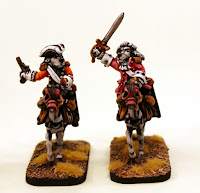 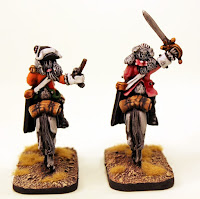 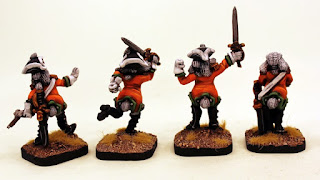 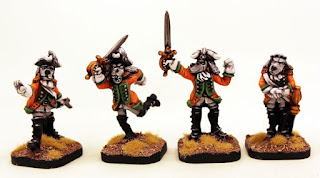 Every command set we made for The World of Valon follows the same methodology in that we have four officers on foot and two mounted.  Those on foot have one of four dominant personalties to reflect officers in Slaughterloo.  These personalties are Aggressive, Cowardly, Heroic and Dastardly.  The mounted officers are always a 'colonel' grade and a 'general' grade for maximum usefulness in an army. The poses are from left to right in the foot officers photograph firstly the 'Cowardly' type of officer with hand out stretched and a pistol, the 'Aggressive' type of officer at a full run teeth bared and sword raised.  Next is the 'Heroic' type of officer sword held aloft and arm raised preparing an order to attack.  Then the 'Dastardly' type officer who is rubbing his hands together plotting how to get his troops killed and himself glory.  The mounted officers from left to right are firstly a 'Colonel' holding the reigns and with a pistol in his hand and secondly a 'General' with raised sword and periwinkle wig.  All are wearing Pudigrochumsberg uniform and most wear a tricorne hat.  These Dogmen are all 'poodle' types making them the same average height and bulk as an Elf.  They are character filled miniatures who would also make excellent additions to an infantry, cavalry, artillery or any other section as well.

Here are some in game photographs of Flintloque of these officers in action! 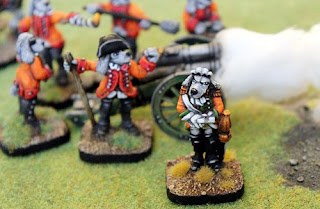 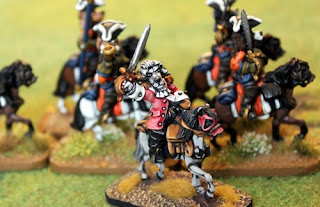 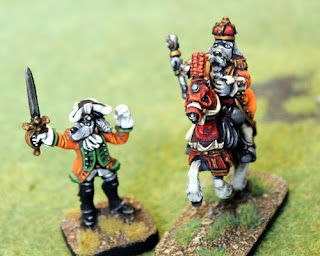 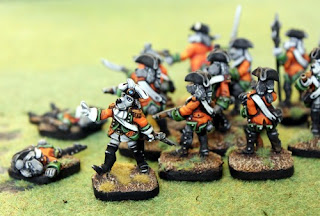 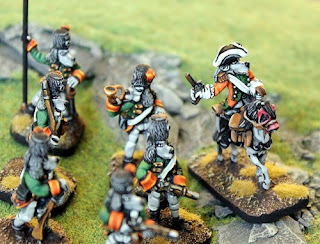 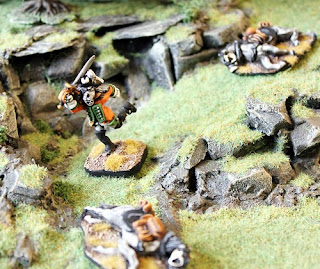 I just have to say that the Aggressive Foot Officer is I think one of the nicest Flintloque miniatures ever!  Such a radical pose and possessing a vitality that makes you think he will begin running at any moment.  Enjoy!