Spooky times abound upon this all hallows weekend. A time of frights, scares, horror movies and gaming (candy and sweets for the nippers instead) and at Alternative Armies we are having a gruesomely good time playing games of Flintloque in the snows of the Witchlands. We want to share the fun with all of you so to that end we have a weekend offer. All 28mm scale including orders placed on our website or by email until midnight 30th October GMT which are of 10.00GBP or more product in the cart will automatically get the 28mm scale Madame Boniface miniature (worth 2.50GBP) included for FREE in the package. Freaky Fine! Go to the website HERE and browse! 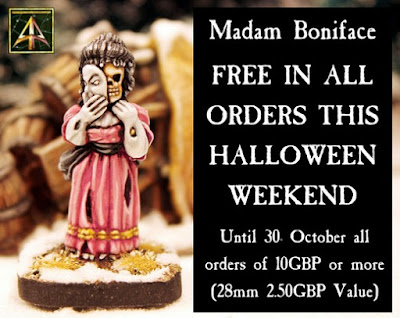 So. Until midnight 30th October 2017 any order placed with Alternative Armies which is 10GBP or more in the cart gets you Madame Boniface for free automatically put in the package. But who is Madame Boniface? 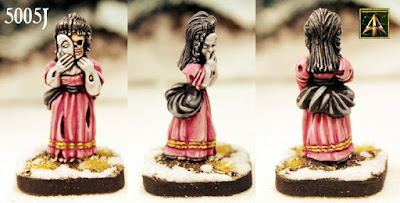 5005J Madame Boniface
This code is taken from the Lady Wintermores Fangs box set of characters for use in Flintloque. It is a one piece 28mm scale white metal miniature of a Skeleton wearing a ball gown with a mask half covering its face. She is the confidante of the Vampyre Lamia Wintermore and her bodyguard too acting undercover at regal events and balls in the city of Moskova. An excellent miniature for many settings in your collection. Supplied unpainted with a square cartouche style resin base. Go HERE and select 5005J or HERE for it on its own. Price 2.50GBP 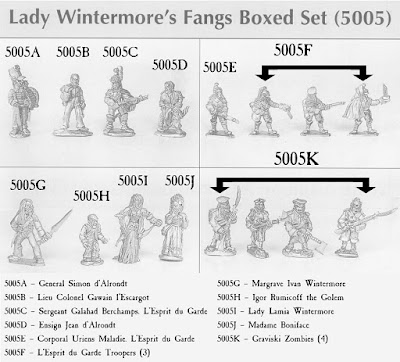 5005 Lady Wintermores Fangs
While the Grande Armee Du Norde is laid waste outside the Dark Czar's capital city Moskova the Emperor Mordred has just escaped the clutches of the Wintermore family of Vampyres...other Ferach officers are now trapped in the Undead infested streets. The Lady Wintermores Fangs scenario box set contains sixteen different 28mm scale white metal character miniatures as well as their bases and a thirty page booklet with profiles, story and statistics to play a scenario arc in Flintloque. You can purchase the box set or get it pro-painted and based and now you may select single miniatures from the box set too just by choosing what you want on the page from the option buttons. Go HERE and have a look. 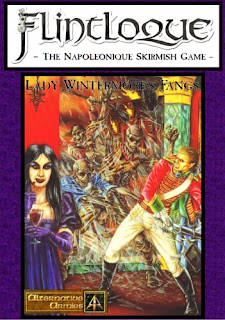 Download Lady Wintermore's Fangs updated to 3rd edition free at Orcs in the Webbe!
Updated by Craig Andrews this new vision of the 5005 booklet can be found HERE. Enjoy! 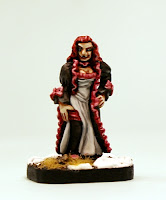 55016 Lady Rosafiend
The nemesis of Lamia Wintermore is the temptress and seductive Lady Rosafiend. The cause of the Emperor Mordred's fever dreams and now she can be yours too!  Go HERE.  2.50GBP.

Get into Flintloque the skirmish the best alternate history fantasy black powder skirmish game there is with 5024 Escape the Dark Czar! A set with a core booklet along with ten miniatures, bases and dice. Your entry into the World of Valon and a massive range of miniatures and titles built up over more than fifteen years. From this starting point you can go in any direction from continuing the fight in the Witchlands to the dusty lands of Catalucia or the rolling fields of Urop marching with or against the eagle banners of the Emperor Mordred and his blue coated Elves.

The bitter retreat from Moskova is where you begin your adventure. Take command of General de Brigade Hugo Saindoux and his three fellow survivors as they attempt to evade death and escape from the Witchlands. On their heels are a group of Savant Zombies, the finest Undead in the ranks of the Dark Czar, who are led by Captain Preserovitch. Their task is to capture the golden eagle standard carried by the young Elven drummer boy Ayers Quinte de Toux. Will the survivors outwit the living dead? In this set is a twenty page booklet containing the core rules of Flintloque the Skirmish which will get you playing as well as character profiles and three introductory scenarios as well as the story of the Witchlands campaign. Written by Gavin Syme (GBS) Ten high quality resin 28mm miniatures are in the set designed by Sam Croes. Four mortals (An Elf, young Elf, Dogman and Ogre) and six Savant Zombies. Ten bases for your miniatures and two percentile dice. All you need to get playing and to begin your adventures in Flintloque. Go HERE.