“Galdar was strong and he was smart.  He walked the bad lands with cleaver and boom stick seeking the good things in the sun life.  The folks in Shan Diago among the toothy ruins of the old times had said not to walk the dirts of the highaways to the west.  Monsters were there they said.  Galdar had laughed at this and had his way with what the tribe could offer before moving on at dawn.  The revelry had cost him plastik and salt beef but it had been worth it.  Now he walked the dirt with the ruins far behind.  Nothing stirred.  No birds, nor running animals which was odd.  Much of the land was poisoned but stuff lived..not here though.  This was strange but he did not feel the sickness of the poison so he walked on.  Ignorant folk they were indeed and soon he was outside a large decayed building with many fallen red signs around its grounds and a mighty rent in its thick wall.  Galdar wondered if there was richness within and decided to try and seek it.  As he approached the soil under his feet began to vibrate and he stopped and drew his weapons; alert to danger.  He saw nothing.  Then the brown dirt broke apart and tentacles rose out of it only a short distance from his feet.  Galdar jumped back and was about to use his boom stick when he halted as its bullets were few and hard to get.  His blade would kill this thing.  As he rose the sharpened steel bar the ground under him suddenly gave way and he was falling!  The last thing young Galdar saw was a bony beak opening and then his flesh was torn and chewed.”

A new monster for use in any scale released at Alternative Armies.  The Gore Worm is the stuff of tremorous nightmares.  Go HERE or read on for more about EH range and this new miniature. 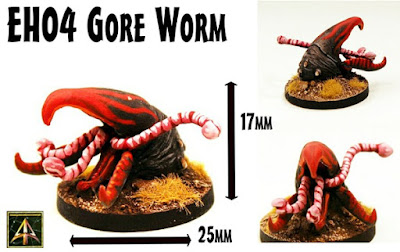 EH04 Gore Worm
Emerging from the ground the Gore Worm is a hunter without mercy.  It senses vibrations and seeks out prey before using its lashing out with rope like tongues and dragging its food to its hard bone beak to be crushed. This pack contains one white metal miniature supplied in several parts which require assembly. It is 17mm tall to top of beak and 25mm across the underside. This code is supplied unpainted and unassembled without a base.  Other miniatures are shown for scale and not included.  Sculpted by Craig Armstrong.  Price 5.00GBP.  Go HERE. 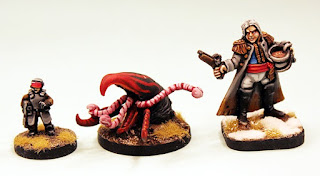 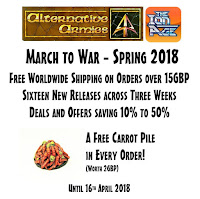 Alternative Armies has some really nice monsters and creatures in its ranges for 28mm fantasy and other genre wargaming.  Click on any that belong in your collection.