Now released at Alternative Armies our largest model and a fantastic 28mm centre piece for any evil or chaotic themed army.  Lord Rusa rides to war atop a Giant Wyvern armed with a long lance.  This model kit comes in a combination of high quality grey tone resin, white metal and brass rod pieces and was sculpted by Sam Croes. We think its bloody awesome and we hope you like it too. Towers over the field.  Go HERE or read on for more.  March to War (free shipping and gifts and offers) is on until 16th April 2018 and for details read HERE.

“I would not have thought it possible but then none of us had ever seen a warlord like Lord Ruza before.  He had united the northern tribes with a sword dripping with our blood and through we offered him the choice of our finest steeds he refused.  To him it was majesty more than anything which mattered.  Power was firstly in the eye of the beholder and to look upon him in battle was to bring not only fear but abject terror.  To win the battle before a blow was struck that was what our lord wanted.  To achieve this he lured the Wyvern Kildane from its lofty perch among the peaks with raiding parties of our warriors.  The beast ate hundreds of our number as our lord learned its ways and its nature.  When the time came he captured it.  I swear to Dagga none of us know how but in word and deed the wyvern knelt and allowed itself to be climbed and then saddled.  Now we ride and march behind Lord Ruza and the Orcs flee and the Dwarves piss themselves.  After all our lord makes the kill and then his beast consumes it.  A partnership which suits them and us too.  We are rich with the plunder of a dozen peoples!” - Caltus Mac Drow. 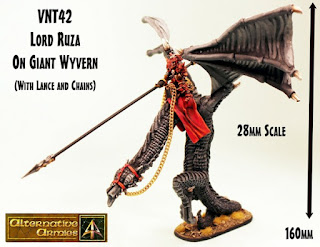 VNT42 Lord Rusa with Lance on great Wyvern Kildane
This monster with rider code, currently our biggest and most in depth model ever, contains one high quality grey tone resin very large monster kit in 28mm scale (four parts being body, head, left wing, right wing) as well as a white metal rider (Rusa, a Chaotic allied Human in elaborate plate armour) with a two piece saddle as well as a lance tip and lance end cap in white metal.  Also supplied is a length of brass rod for the shaft of the lance and two lengths of brass chain to allow Lord Rusa to control Kildane. It is supplied as shown once built but it is supplied unpainted and unassembled from us.  It is not a complex build but does require a degree of modelling skill. 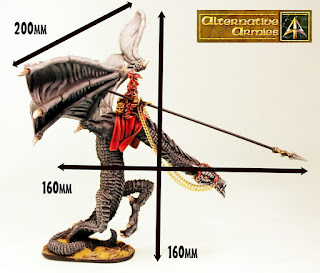 When built this winged monster with its rider stands at 170mm tall with a wingspan of 200mm . The Wyvern (which is VNT33 Kildane on its own) is supplied in four parts with an integral base making it super easy to assemble and rugged for wargame use.  The head is outfitted with harness and mount points for chain. 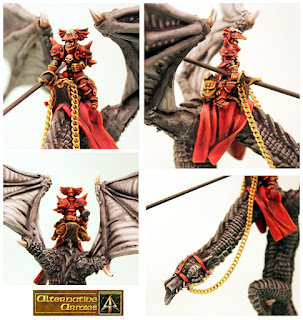 A great centre piece for your 28mm high fantasy army. Suitable for any fantasy wargame system. Assembly required using visual guide to pieces from our images shown and some care and this code is supplied unpainted.  If you would like your Lord Rusa with lance mounted on an armoured horse check out code VNT42A. Note items not from VNT42 are shown for scale only and not supplied. Go HERE.  Price 32.50GBP.


Alternative Armies has some other 28mm codes which are large and an excellent centre piece for an army.  Here they are and if you want more information please  click through to them.