Article 12 A Call of the Wild by Andy Jefcoate

Hungry like the Wolf! Andy Jefcoate lopes into the snows in his twelfth article for his games of Flintloque in the Witchlands and has a great micro scenario to share as well. If you want to catch up with the previous articles you can do so by clicking HERE for Andy's tag on the blog. With pictures of his own painted collection. Read on and enjoy. GBS 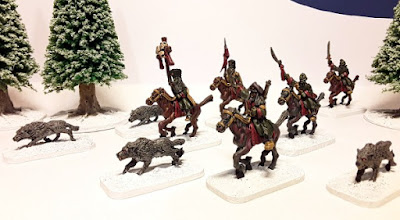 A Call of the Wild!

Previously I mentioned that I needed some heavy cavalry for my Ferach force. You have now seen these great Ogres and I now want to tell you about some of my games and the figures that I've used that I've not mentioned so far. For this article I'd like to concentrate on 56000 The Wolf Pack. With all the excellent figures in the Flintloque and Slaughterloo ranges they could easily be overlooked, but this would be a shame as I've found them to be a very useful addition to my collection. 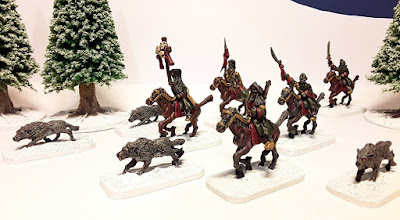 What do you get?
For only £8.00 you get 4 metal wolf figures in 2 different poses, one is running and one is stalking but they are both clearly on the hunt!  As with all Alternative Armies figures they are nicely cast with little preparation required before painting and I've put them on cavalry bases due to their size. I used a very simple colour scheme of grey fur with a lighter underbelly before adding a black ink wash and then the details of red eyes, black nose and off-colour teeth. They were very quick to do so they were on the table in an afternoon!

What use are mere wolves I hear you cry!

Wolves are listed in the Mortal Racial Statistics Tables for the Witchlands Theater in the 5026 Death in the Snow Game Book and cost 18 points each. This is excellent value as they have a Double March movement rate of 44cm (faster than a heavy horse), they have a Steady Rating of 2 (the same as a Dogman), and they have a Melee Modifier of +5 (the same as the basic modifier of a Trolka!) making them lethal in close combat as you would expect.

The downside is that they only have 1 wound each so they won't stick around long if they lose a fight or get shot. This means that you need to be cautious and that they work better as a pack rather than individuals, which fits with their real life counterparts and is a nice touch in play.  Use enmasse! 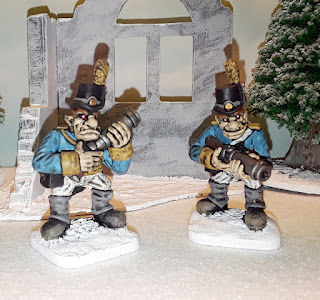 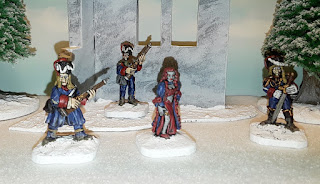 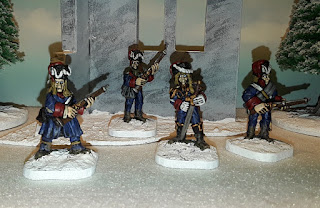 How have I used them in my games
As the Dark Czar has an iron control of the Witchlands my thoughts were that this includes all of the creatures both Undead and Mortal within his domain. As the Zombies began their pursuit of the fleeing Ferach forces, the denizens of the surrounding countryside also joined the attack. I have therefore added the wolf pack to my Witchlands sections.

They have been great in support of my Zombiski Cossacks where they've been thrown into combat with them to insure outnumbering of their foes and to attempt to swing the combat in the favour of the Undead.

They've also been good to use to loop around the flanks to harass light troops or cannon crews. This makes the enemy bunch together as most troopers can potentially be in trouble in close combat against their +5 Melee Modifier, especially if two or more wolves attack together to cause outnumbering.

Their downside is their vulnerability to shooting so I try to use terrain as much as possible to mask their approach. Zombies on foot or mounted can also make a good shield while the forces close as they can soak up a bit of damage and keep staggering on! 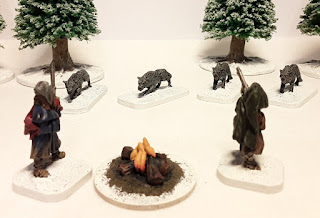 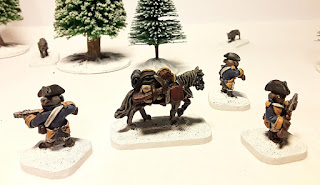 Special Scenario: Escaping the Fangs
A small Ferach force has loaded their supplies onto a pack mule and are trying to reach the safety of their own lines. As they don't know how far they will need to travel they want to keep the mule alive to carry what they need to survive in the wilderness.

The game is fought on a 3' x 3' table. Although there is a covering of snow this is not enough to affect movement. Scenery consists of 2 small hills and 6 trees that are positioned randomly across the playing area. As the forces I've used for this game are so small I haven't set a turn limit as it can usually be played to a conclusion in under an hour.

After any scenery is set up the Ferach force decide which edge to start on and set up. The wolves then set up at the middle of any other table edge and can be split up across all three if desired.

I only have the four wolves from one pack which total 72 points. A pack leader figure should be nominated but the wolves don't suffer any ill affects for being any distance away from this figure. As the wolves are rightly wary of firearms they can only charge the mule if there isn't an enemy figure with a gun closer to them than the mule, as the firelock is the greater threat.

The Ferach force is then allowed a maximum of 72 points to match this. As the force is so small the normal unit leader rules aren't required and the figure with the highest experience rating is the leader for this scenario. The pack mule is free and for game purposes is treated as a Donkey/Pony from the Mortal Mounts Statistics Table but it's movement is halved due to the amount of supplies it is carrying. 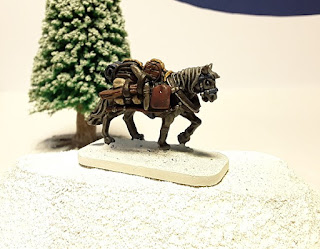 For the pack mule I've used the excellent figure from pack 56537 the Dogmen Engineers set. This can be purchased separately too which is a nice touch.

I've found this to be an interesting scenario to play and needs different tactics to a regular Flintloque game. The trick with the Ferach force is to keep any troops between the wolves and the mule so it works better using the points on several troopers rather than one or two more powerful individuals. Be careful when moving two figures at a time that the mule doesn't get exposed to attack but also the wolves can be deadly in combat with rank and file troopers so keep those Flintloques loaded and take them out from a distance!

With the wolves you can surround the enemy to try to get a chance of attacking the mule while using cover as best as you can, but sometimes it is easier to try to take out the weaker Ferach figures to force your way in. It's all about being patient and watching for the best time to strike while trying very hard to not get shot!

What's next
I hope that you've enjoyed reading about my wolf pack and that I've inspired you to get some. My favourite aspect of Flintloque is the scenarios you can create from the excellent and diverse range of figures available. In future articles I'll let you know about some of the other figures I've used in my games.  You can see my massive Trolka, my elite Elf Carabiniers and Lady Rosafiend above.