Alternative Armies is delighted to announce the release of a new pack for 15mm scale fantasy.  To go with our recent release of new Elf Cavalry we have an Elf Hero mounted on a Griffen. Great for any system including HOTT 2nd edition. Go HERE for the range or read on for more information. 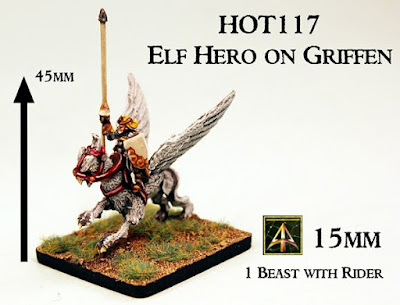 Our new release is a variant on our popular HOT27 Griffen which is a monster featuring in Elvish Armies. 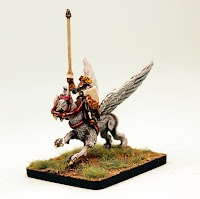 HOT117 Elf Hero on Griffen
15mm scale miniatures.  This code contains white metal miniatures in four pieces which give you an Elf hero in plate armour holding a lance and shield mounted upon a Griffen which has a saddle and riding tackle (separate wings). When assembled it is 45mm tall. A great centre piece for your High Elf Army.  With this pack you can purchase the whole set or you can select the rider only or the beast only if you want to do conversions or re-mounts with other models.  This pack goes excellently with the other HOT Elves such as HOT8 Elf Command and HOT10 Elf Spearmen and so on.  Go HERE.  6.00GBP 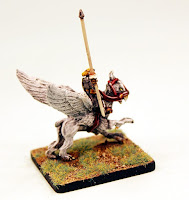 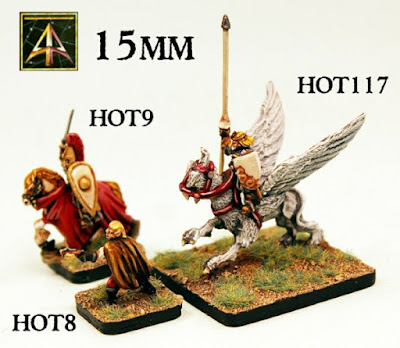 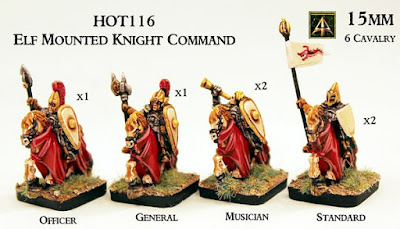 HOT116 Elf Mounted Knight Command
15mm Scale Miniatures. This code contains white metal and resin miniatures in the following mixed poses: Elf Officer on Resin Horse x 1, Elf General on Resin Horse x 1, Elf Musician on Resin Horse x 2, Elf Banner Bearer on Resin Horse x 2. As with all HOT 15mm Fantasy codes you can purchase a pack or you can choose a sampler which gives you one of each pose of miniature from this pack; a great way to try or to make skirmish forces with HOT.  With this pack you can also select single poses from the pack in any quantity by selecting and adding to the cart. These miniatures are meant to mix with HOT8 Elf Command as well as HOT9, HOT42 and HOT43 Elf Cavalry to create whole regiments.  Go HERE.

We have a whole High Elf Army in packs in the range.  Here are the details beginning with those cavalry type packs which now have the snazzy resin barded horse.