A brand new 15mm scale science fiction miniature now released into the SHM Range.  A steam punk soldier of the imagined world of La Guerre Infernale (The Infernal War published in serial in 1908) to celebrate Mars being closer to the Earth than it has been since 2003...an excellent time to launch an Empire based conquest!  As a gift Alternative Armies is putting SHM93 Soldat de Vide free automatically into any order placed until 5th August 2018.  Go HERE or read on for more.  We have no further releases this month. 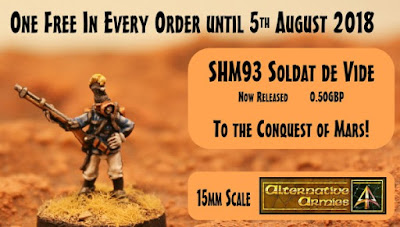 The red planet will be nearer to our terran realm at the end of July 2018 than any time since 2003 and while it may not be possible for you to 'get your ass to Mars; as the famous saying went here at Alternative Armies we have something nearly as good.  For players of 15mm science fiction, steam punk, post apocalyptic and other systems a new release.   The SHM range has a huge choice of single miniatures from a dozen designers on all manner of subjects and this latest figure is a great addition. 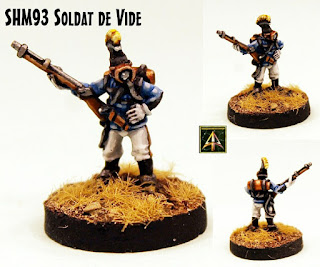 SHM93 Soldat de Vide
This code contains one white metal 15mm scale miniature. Stands 18mm tall to the plume and is in one piece. A steam punk soldier of the imagined world of Pierre Giffard’s La Guerre Infernale (The Infernal War published in serial in 1908).  Dressed in a French style infantry uniform with air tank and sealed helmet with plume.  Carrying a long rifle.  Great for fighting on Mars or on the Moon or even under the sea.  Sculpted by Sam Croes.  0.50GBP.  Go HERE.

Until 5th August 2018 we are putting SHM93 into any order placed with us at the rate of one per order (no limit on number of orders) in any cart which contains one or more items which rates shipping (meaning not Digital Downloads).  We will do this automatically and you need not do anything but order.  Your gift to you and thanks for your support!

As we said the idea behind this new soldier is the classic Edwardian era created Infernal War serial which was published in 1908.  Written by Albert Robida and illustrated by Pierre Giffard this serial gave a different view of a possible future than that of H.G.Wells for example.  A world which never came but can act as a superb setting for 15mm scale wargaming. 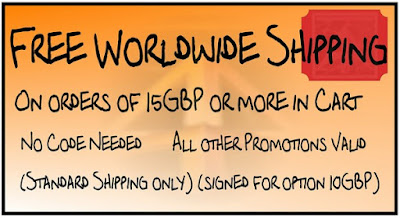 Additionally we have automatic FREE WORLDWIDE SHIPPING now on until Wednesday 1st August 9am GMT on all orders of 15GBP or more in cart. You will get the SHM93 miniature as well in each package. This is standard shipping and a tracked package remains 10GBP flat rate. Full details in the next article but it is now on and just go to our website and browse. Just add to cart.