We love Trolls in all their forms at Alternative Armies.  From the mighty Trolka and the smaller Trolkin who feature in the World of Valon as an army in Flintloque and Slaughterloo to the high fantasy classic style Troll and the massive Giant Troll too.  This week we are having a Troll Week with every Troll miniature we have all in one place on a special offer of ten percent off everything and a FREE Trolka Line Trooper (worth 5GBP) included in any order which has a Troll of any type in it.  Go HERE or read on for more.  Ends Midnight GMT Sunday 19th August 2018. 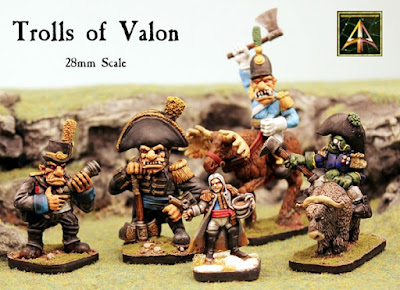 The Troll Races
Giant and Loyal Allies of the Ferach Empire

The frigid, mountainous land of Skandavia is one of the northernmost nations of Valon. It is a very wild and undeveloped land known for its majestic coniferous forests and rocky landscape. Its many mountains appear to be very rounded from years of harsh weather and the grinding glaciers that once crept across the land. These mountain ranges form a natural barrier to many would-be conquerors such as the hideous Undead of the Witchlands and the snarling Werewolves of the Dieberian Tundra. It is here that you will find the Trolka, largest of the sentient races of Valon the giant relatives of the Trolls of the Darke Age. A Trolka is the nearest thing to the War Trolls that used to roam Valon. They survived the annulment of Wylde Magicke and stand some fifteen to twenty feet in height. In the struggle that exists between the forces of Albion and the Elven Empire of Armorica, the Skandavians have come down largely on the side of the Ferach and have put all of their efforts into furthering Mordred’s campaigns in Catalucia and the Witchlands. It is from the capital city Trellheim of Skandavia that officials direct the mighty industry of the nation in production for the front. 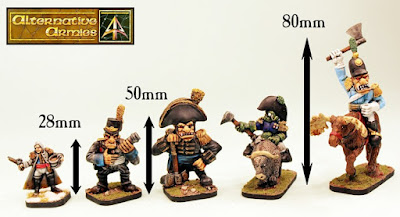 Although Trolka come mainly from Skandavia it is in the island nation of Copendaz that the majority of their more numerous but far smaller cousins the Trolkin. Most Trolkin are the height of Elves while Trolka tower over even the largest of Ogres. While the icy seas prevent incursion of Skandavia and Copendaz easily from the waters and the mountains prevent the Undead from sending large armies of conquest there are greater dangers in the Artorc Circle in the backward realm of Frozlande where monsters still roam. The massive walls of the Skandavian Imperial Palace tower above the bustling streets of the capital Trellheim and the eminently skilled workers labour in the shipyards constructing the hulls of his Imperial Majesty Mordred’s powerful warships, in an effort to reverse the terrible setback of the sea battle known as Trafalgore. These raw materials have proven vital to the war efforts of Armorica and her allies. Consequently, the Grand Alliance has recently tried to raid many towns, with massive Trolka Warriors fighting on both sides, in an effort to stop the flow of materials being shipped from Skandavia. Lord Bjornborg head of the Ferach alliance with the Trolka directs the movement of Trolka military forces from the Imperial palace until they are assigned to the various Corps in Mordred’s Armee. He has even taken to the field in order to hunt down the traitorous General Gustavus leader of the Trolka Companies that have pledged their loyalty to King Gorge and Albion. 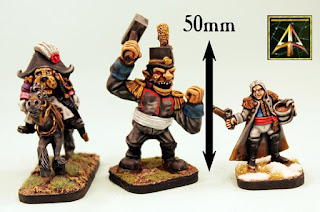 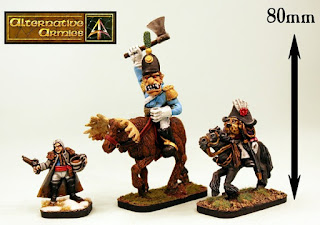 The majority of Trolka fight with the Ferach and are the mightiest race known on Valon, they are massive soldiers with huge strength, able to uproot trees and lift items several tons in weight. While whole divisions of Trolka are rare even in the largest battles, due to the small number of these soldiers available, regiments of Trolka can be found anchoring the battle lines of the Elves in many theatres of the Wars. The ‘Rebel’ Trolka are in the service of the Grand Alliance.

Trolka and Trolkin are a great army to collect and play in Flintloque (see 5025 Death in the Snow) and in Slaughterloo (see 5030 Slaughterloo) with unique traits and the biggest regular soldiers it is possible to field.  There are Line, Jager, Artillery and Cavalry Trolka and there are Line, Jager, Artillery, Civilians and Personalities for Trolkin.  Each of them comes with a cartouche style base and is typically a single piece miniature.  Go HERE to browse.  Trolka stand 50mm tall and have a 30mm square base. 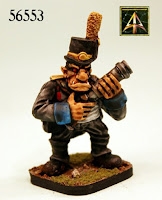 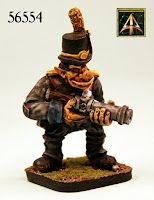 In celebration if you place an order during this week which contains any Troll code (any number of orders, any number of Trolls) you will get each time automatically added a Trolka Line Trooper with Skandavian Kannonderbuss (either code 56553 or 56554 and we will vary them if you place more than one order).  A resin miniature with base worth 5.00GBP.   You need do nothing other than place the order, we will add the freebie! 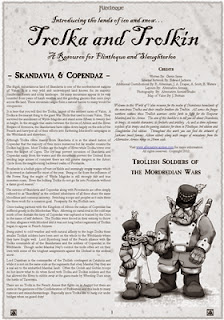 If you are keen on learning about the Troll Nations of Valon during the Mordredian Wars then you can in a free Army Booklet download which contains background, unit statistics, game statistics and more. From our website hosting by clicking HERE.  Enjoy! 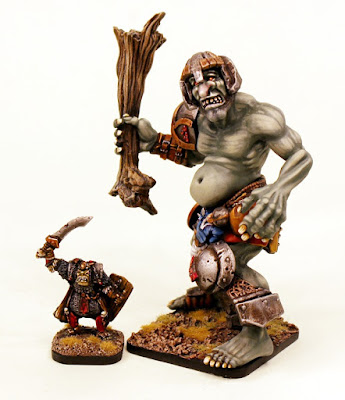 “Oi! Dat's my seat. Gerr off it! You fink you tough eh! Gonna give me a smack is you? Well dat's fine but I tells you what first. You can ave dis seat if you beats my mate Durzum at arm wrestling. Where is ee? He is outside. Barred from dis pub he is after da last time. E' got a bit drunk an den well e sat on da roof. Climbed up you say? Err kinda. Sat on it at any rate. Any'ow if you wants dis seat you got to beat him. He's outside now. On u goes. Tell im dat I sent ya. Hold on...you best take da seat wif you...you mights need da extra height” - The last conversation between two Orcs at the notorious Three Legged Harpy pub. 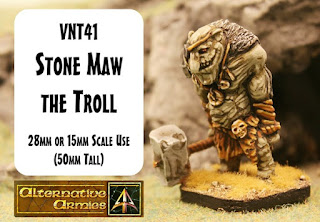 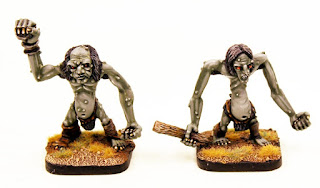 Alternative Armies has 28mm scale high fantasy Trolls in that superb classic style.  Above you can see OH31 Durzum the Dwarf Killer our Giant Troll who is 100mm tall and comes with a free Orc Warrior.  We have two other packs as well.  VNT9 Trolls which contains two white metal 28mm scale Trolls at a superb price and VNT41 Stone Maw the Troll who is our latest addition.  These are included in the week long offer (if you would rather have a VNT9 Troll for free than a Trolka then just let us know with your order number to sales@alternative-armies.com). 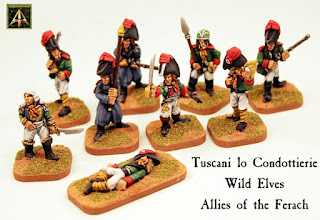 We have two other Flintloque related treats for you this week during the offer period and what is more both of them are totally free!  We have the thirteenth article from Andy Jefcoate which sees Lamia Wintermore take up the pursuit of his band of survivors in the Witchlands.  We also have a Flintloque scenario called 'By Bloody Fist and Broken Tusk' written by Gavin Syme (GBS) which sees Tuscani Elves face off against Captain Sharke.  If you want to see the new Tuscani Elves and download a free uniformation article just now then see our blog article HERE.  Both of these articles will be published across this week.

We hope you enjoy Troll Week!