Erin Celtic Myth from the collection of James Morris

It is my pleasure to present to you all a treat.  In conjunction with our offer on the whole 28mm range of Erin miniatures and the game book and boxed set this week some pictures of the fantastic collection of James Morris.  Featuring Fomori, Fir Bolg and Milesians as well as some fantastic backdrops and scenic set ups you can really feel mythical Ireland come to life.  See the whole range HERE. 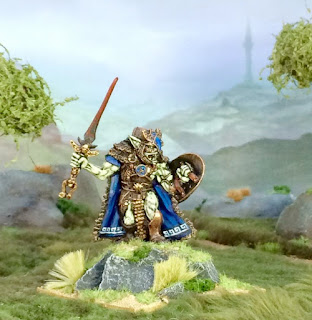 Here are all of the images along with some information about each one for you.  Additionally the super backdrops in the photos come from Jon Hodgeson Maps and can be found at that link.  We finish with a little about the Erin game and what makes it stand apart for lovers of Celtic Mythology.

The Formori are the sea dwellers who come to the land to conquer, with little in the way of lofty ideals, it is for avarice and cruelty that they quest. The first image above shows you the mighty King Culach lord of all Fomori with his magical sword.  A huge miniature standing 65mm tall from code ER14. 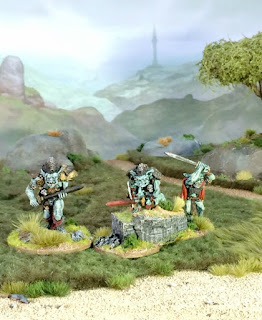 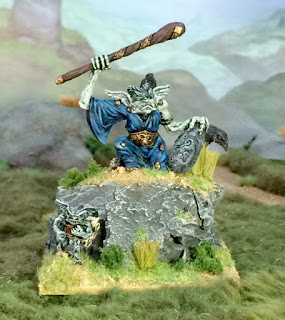 This third picture is Ethniu the summoner.  Rumoured to be a daughter of Balor or perhaps even Culach she wields terrible dark forces in the aid of the foam cresters.  A one piece miniature from pack ER13. 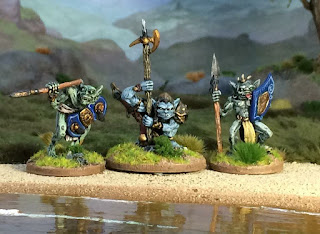 Forth in pictures we have the warband of the Fomori having just emerged out upon the land from the cold dark waters.  Warriors either side of a Champion ready to strike down the Fir Bolg when the horn sounds for battle.  Packs ER11 and ER12. 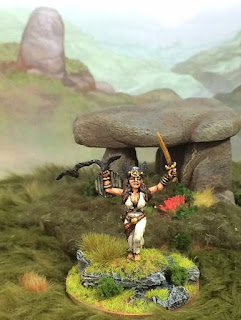 Fifth in line this photograph is one of the Warrior Gods of Erin.  A queen of battle magics with control of the very birds of the air.  An ally to man.  Find her in pack ER22. 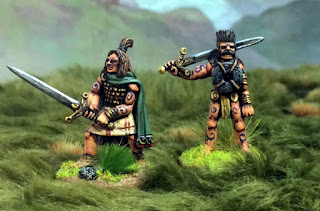 Stepping in sixth are the strong and skilful Sun Warriors who raise their swords for those worthy.  Often the sworn enemies of the Fomori as water dulls the brilliance of the sun.  From pack ER24. 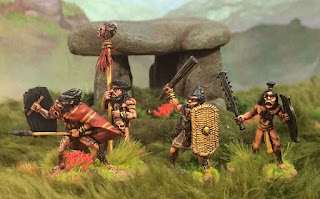 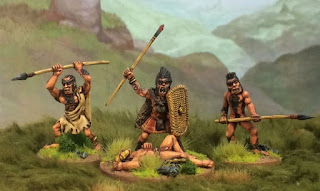 The seventh and eight pictures are of the Fir Bolg the travelling warriors who came to Erin fleeing monsters of which they will not speak.  Skilled with spear and sword they will carry off their prizes given the chance.  Miniatures from packs ER6 and ER7.

If you are keen on playing the Heroes of legendary Ireland then check our the Erin game HERE which can be had as a book or as a book with miniatures in a game pack. 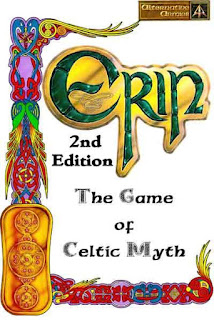 The legendary time of the Invasion Cycle in Ireland or as she was called Erin. Create a Warband led by a Hero and a number of Champions and a group of followers. Recruit Enchanted Animals and Monsters along with abilities and Druidic Magic to assist you in your stuggle. Choose from the evil Fomori devils of the northern seas, the magical Sidhe faerie warriors of the deep ground, the Fir Bolg warriors of great strength, the Nemedians stag headed men of the forests or lastly the Milesians the human celtic who would come to populate all of Erin.

Erin 2nd Edition has an easily learned 2D6 based rules system that is scenario driven with a normal game lasting between one and two hours in play. The game book features full rules, no need for expansions, create and advance your characters and creatures using a full points and warband and hero generation system. Also a full Druidic Magic system and all needed rules for Chariots, Horses, Gods, Enchanted Animals and Monsters. A full and detailed narrative of the history of Erin and sections detailing the nature of each of the five main peoples of Erin. Includes three made scenarios and a short section for inclusion of a fictional Roman Invasion of Erin. Generate scenarios, the landscape and even the weather and then use the mini campaign section to manage your warband between games.  The Rule Book or The Game Pack which is the rule book and sixteen miniatures along with 2D6 dice. Miniatures are a Sidhe Warband and a Fomorian Warband. Complete starter game pack.