Tuscani Light Infantry and Campaigning Back Packs released for Flintloque

“With a grunt Antoine De Vassile brought the huge rifle up to his shoulder and took aim down the iron ring set atop the barrel. The muscles in his arms strained to cope with a firelock made for an Ogre but he had practised and drilled endlessly. He had joined the Condottierie a long time ago and had hunted monsters with this rifle and had accepted the broken shoulder and endless bruising it caused him. This rifle was death to the foes of the Emperor and it was gold in his pockets for his sister and mother. In the distance among the trees the Cacadores of the Goblin enemy flitted back and forth. A ball whipped past Antoine and a puff of smoke from ahead but he did not flinch. He breathed in and led the cockade wearing officer by a fraction and then leaned into the rifle and pulled the trigger. Like a mighty hammer the weapon slammed back and his view was stolen by a great plume of grey powder smoke. Antoine dropped to one knee and put the butt of the rifle into the soft soil looking to see the results of the shot even as his hand sought another thumb sized lead sphere to load. Wind pulled the smoke away and he saw that he had hit the officer true. The Goblin sagged against the blood soaked trunk of a tree his left arm missing along with half his chest from the impact. The Cacadores around the dead officer had frozen in shock and this made De Vassile smile. He rose and smoothly dropped the bullet into the hot barrel before looking left and right along the line of Wild Elves who even now were turning the Al-Garvey soldiers back.”

Welcome to Alternative Armies release for the Flintloque and Slaughterloo game systems for January 2019. Following up on July last year when we put the original and new line infantry Wild Elves online we are delighted to reveal the second full unit pack of Tuscani Elves who fight for the Emperor Mordred. This time the skirmishers who are elite troops and make use of some ruddy big guns! 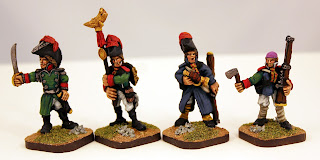 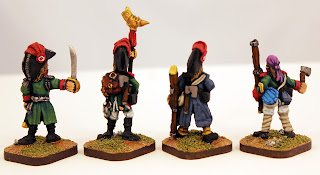 51535 1o Condottierie Light Infantry
Despite a bitter enmity with the Carabiniers of the Grande Armee the skirmishers of the Wild Elves may in fact just be a little better than those elite Armoricans. Sought after by Marshals in Catalucia to hunt down Cacadores and Rifleorcs they are very good troops. They are Light Infantry and make use of Ogre Rifles. This set of miniatures in 28mm white metal gives you twelve Wild Elves a whole unit of light infantry. There are eight different poses of Tuscani Elves dressed in Condottierie uniform with bicorne and these are an Officer, a Standard Bearer, Musician, Sergeant and four different Troopers. We repeat the trooper poses in the unit pack. These miniatures are supplied with separate campaigning back packs (code BS29) which can be attached (as shown in the pictures) or left off. You can choose from a unit pack or single trooper booster. Choose from Unpainted with Bases or Painted and Based. Sculpted by Elton Waters and studio set painted by Mark Taylor. Go HERE.

BS29 Campaigning Packs
This great set is fantastic for any 28mm miniature which is out in the field in the time of Horse and Musket. Six different campaigning back packs each with its own features such as tied on sacks and bags, lengths of rope, food items, hatchet and short axe. Recessed in the rear to fit onto great coats and other uniform details. They can also be placed on bases or in dioramas as part of a terrain piece for extra interest. Choose from the set or select any single pack in any quantity. Go HERE.

We have a great many 'Bits and Sprues' in the range including Pies, Tankards, Feathers, Fruit, Tools, Drum and Standard and many more. 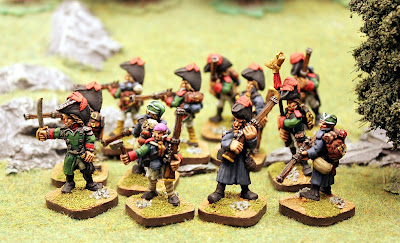 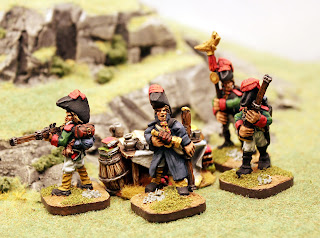 “Wild Elves are stronger and more agile than their noble brothers elsewhere in Armorica. Though not as graceful or elegant they are capable of feats that would test most Orcs in strength and they are more nimble on their feet too. Tuscani have sharp protruding teeth that look like fangs and do not tend to their hair which often hangs unkempt about their broad shoulders. They are expert hunters and make good soldiers.” - taken from Uniformation the Tuscani Wild Elves. 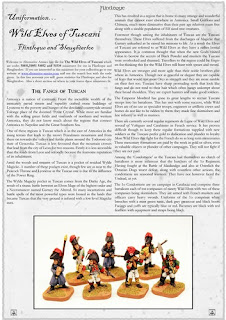 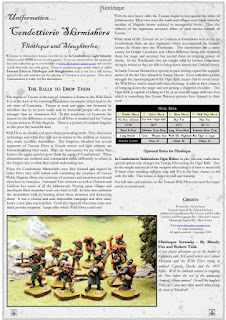 Uniformation Free Downloads for Flintloque and Slaughterloo
We have two different free resources for the Tuscani. A three page article expanding from the books 5025 War in Catalucia and 5030 Slaughterloo a resource giving you a history, character profile, game statistics and tables for Flintloque and Slaughterloo plus uniform and accounts of line and light infantry. Click HERE to download. Also a one page article on the Tuscani Skirmishers with story and optional rule. Click HERE to download. Enjoy! 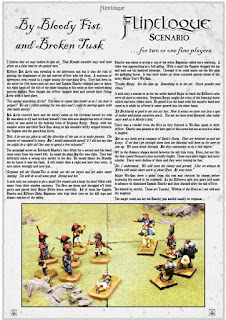 By Bloody Fist and Broken Tusk – Flintloque Scenario
A stand alone full scenario which features some famous characters. It makes use of several free files and also the 5025 War in Catalucia game book. This is a set piece scenario which can go very differently each time it is played. You will need the four page insert for 5109 Sharkes Chosen for the character profiles it contains. Also the Tuscani Wild Elf Uniformation insert for the game statistics it contains. These are linked in the scenario three page PDF. Will Sharke escape the ambush or fall to Wild Elf skill? The scenario can also be expanded or played with two players. CLICK HERE to download it from our website hosting. 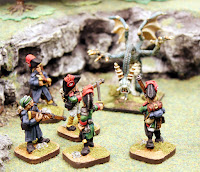 We hope you like these new miniatures with their big guns and also the free resources. I am thinking on writing a scenario which features the newly recruited and trained Wild Elf skirmishers going up against a Jabberwock or two in a Wylde Magicke game of firelock against claws. We will see what happens but if you would like to see this scenario happen or just want to ask a question drop me a line on sales@alternative-armies.com or visit our Facebook Group.