In the aftermath of the Severed Ears War the legions of the Von Rotte were exiled from Krautia along with their illustrious leader the Baron Frederick the Ales Von Rotte. Having tangled just once too often with Artur the ruler of Krautia the Baron had little choice but to throw in his lot with the Elves of Armorica. The newly formed Confederation of Finklestein, a loosely tied group of small Dwarven states, welcomed the Von Rotte legions with open arms. Finely drilled infantry, cavalry and gunners were thin on the ground and a general as talented as the Baron was rare indeed. Swearing an oath of fealty to the Elvish Emperor Mordred the Baron was given command not only of his own soldiers but also some of those belonging to the Emperor in his wars against Krautia and Ostaria. - The History of the Baron Von Rotte 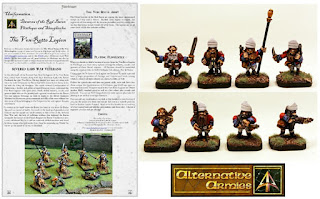 Now online for free download our Army Booklet for players of Flintloque and Slaughterloo to add the Von Rotte Legion to your games.  Skirmishing and Mass Battle statistics plus profiles of main regiments and their uniforms.  To see this army from The World of Valon go HERE or read on for more and to download. 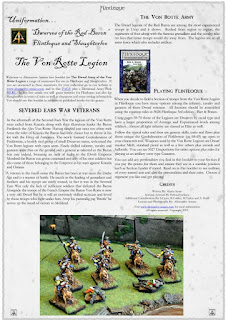 Army of The Von Rotte Legion
A five page booklet containing background for the most famous fighter on Valon and allies of the Emperor Mordred of the Ferach.  Flintloque and Slaughterloo rules and game statistics as well as information on the Bier Wars plus pictures. A great short read which will slot right into your collection of published titles such as 5028 Bier and Bones and 5030 Slaughterloo.  CLICK HERE to get the PDF from our online storage.

There are ten different choices of troops in this Army. Above you can see core favourites 52521 Von Rotte Light Troops and 52520 Von Rotte Hussars which is where many players begin their journey with this force.

If you are wanting to get into Flintloque then of course you should begin by checking out 5024 Escape the Dark Czar in which there are miniatures which work well with the Von Rotte as those Dwarves are in the Witchlands too.  If you are keen on Mass Battle then check out Slaughterloo and the Divisional Army Pack (DAP) for these Dwarves (code 52603).  As with all codes in the World of Valon range you can select a pack, or a unit, or single trooper booster plus the option of purchasing painted and based ready for play when it comes to the Legion. There are a great many other free files at Alternative Armies for download including a great deal for Flintloque such as the insert Uniformation Tuscani Skirmishers and the expansion scenarios for the Escape the Dark Czar beginners set.  Check them out HERE and just scroll down and click on what you want.