VNT17 The Griffin in 28mm scale returns to Alternative Armies

Among our new releases in our ranges Alternative Armies is also constantly re-molding existing models and bringing in print runs of existing titles.  Typically we do not tell you all about this as it is ongoing.  But every now and again a code will also be re-mastered (meaning its design is tweaked or tightened for easier casting or production) and it gets a new paint scheme or other improvement.  These we like to share.  This time it is a 28mm scale model which has not been in production for the VNT range (haunt of the Undead and Monsters) for a great many years.  The Griffin returns! 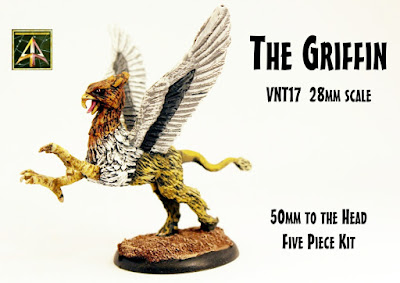 VNT17 The Griffin
This code contains one five part metal model in 28mm scale.  Easy to assemble it consists of a body with head and tail, a pair of wings and two sets of claws.  Re-mastered from the original 1990's sculpt by Steve Trickett this monster is great for any high fantasy setting of system.  It measures 50mm from foot to head and is 80mm from claw tip to end of tail.  Imposing the Griffin is a hunter of men.  A legendary creature with the body, tail, and back legs of a lion; the head and wings of an eagle; and an eagle's talons as its front feet. Because the lion was traditionally considered the king of the beasts, and the eagle the king of the birds, by the Middle Ages the griffin was thought to be an especially powerful and majestic creature. Since classical antiquity, griffins were known for guarding treasures and priceless possessions.  Go HERE. 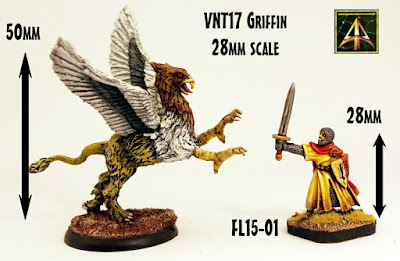 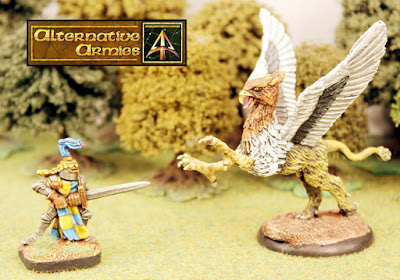 A suitable foe for your Knights to take on in a quest or with a bit of conversion work you could mount a saddle upon it.  In the pictures of this article we show our Knights from FL12 Men at Arms and FL15 Men at Arms II. 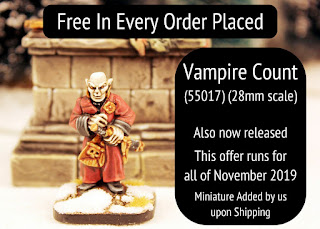 Count Valdimir Kustosov the Vampire is free in every order placed and shipped out during November 2019 at Alternative Armies.  Learn more on our BLOG or see the WEBSITE. You can of course purchase this figure too if you wish.  Long term players of Flintloque may recognise this classic 1998 miniature which has been out of production for nearly twenty years. It has a new code and new...life...re-mastered and on the website.  We also have updates and specials on our DEALS AND OFFERS page suitable for spooky season.