It is with great pleasure that we bring to you the value set rounding off the ninth array of single and pack codes in the Sengoku 15mm Japanese Fantasy range.  As with the other eight sets this one allows you to get one of everything with a saving built in.  Ideal for collecting and skirmishing. Go HERE for the range. 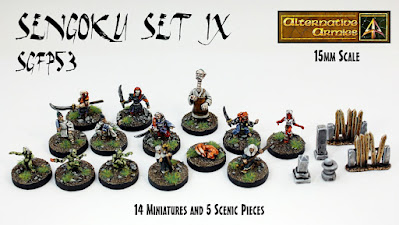 SGFP53 Sengoku Set IX: Fourteen metal miniatures plus five scenic metal pieces all designed by John Bell suitable for use in any oriental themed 15mm scale game system or army. This is a set containing one of every pose in the ninth set of the range SGF169 through to SGF187.  Small amount of Assembly required. The pack offers a small saving off single purchases of those codes. Get one of everything! Bases used in the picture are 20mm round for scale estimation. 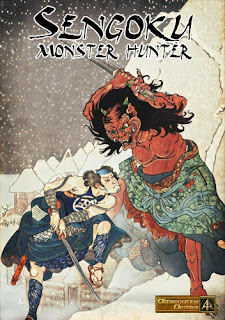 While you can use the over 180 different miniatures in the range for any system they are meant for use with the Monster Hunter rules.  Written by Steve Dane (author of Doom Squad solo play rules and Furioso Renaissance rules) you take the role of a hunter who assembled a small band of followers and then seeks out yokai and other creatures. Solo play.  A fun set of rules which has random encounters so no two plays are the same.  It also has Rampage the second book giving more rules as well as more monsters, named hunters and rampage mode which makes 'the hunters the hunted'.  Both books are in print and twenty percent cheaper as direct digital downloads.  Go HERE.