It was our pleasure to sponsor with prizes the resumed annual DBA tournament held by the Bakewell Club in England.  Our thanks to Simon for the following account and photos.  If you are interested in 15mm Dark Age miniatures see the website (Blemye were the prizes from us) and go to the Fanaticus Boards if you are keen on knowing more.  Over to you Simon! 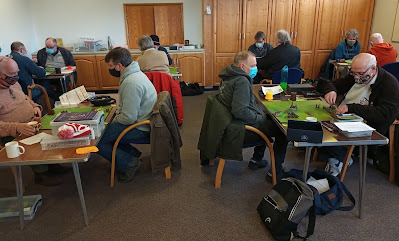 Eighteen players turned up for the Bakewell Blinded by the Lights tournament yesterday and it was also good to see some new faces in Bakewell, particularly those who had travelled a long way such as from Kent and Worcester.  The above photo is from the tournament in progress and the other is winner of the grand prize Pete Duckworth giving thumbs up and that is me on the right! Congratulations to winner Pete Duckworth who went away with some Blemye 15mm figure packs kindly provided by Gavin at Alternative Armies. Thanks for your sponsorship. 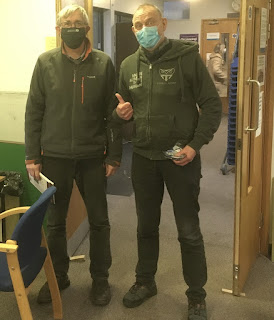 Very close runners up were Mark Johnson and Rob Rush in 2nd and 3rd places respectively.

The Blind General rule was in play, whereby your opponent threw your PIPS dice and didn't let you know how many you had until you ran out. There was also a tournament requirement that only two elements in an army could have base combat factors of 4 or more and so there were some interesting armies on the tables.

If you have a tournament and would like to approach us for sponsorship we are happy to speak to you.  Contact sales@alternative-armies.com and tell us your event, address and other useful information.  We can offer prizes for historical, fantasy, science fiction events and we like to encourage the hobby.