Graviski Infantry return for Flintloque and update on Deadloque set

Following up on the 55508 Zombie Line, 55007 Moskova Volunteers, 55520 Croaked Line and the 55005 Latrinslav Command (seek them using the search box by code on the site) we have another classic Flintloque pack which is remastered and new molds too. See the Undead Army of the Dark Czar and read on for more. 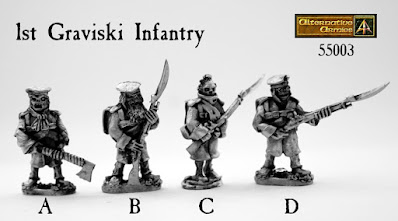 55003 1st Graviski Infantry: Some of the first Zombies in the Flintloque range these four metal 28mm scale dead fellows were once soldiers of Mordred as he marched into the Witchlands. Armed with Musket and Axe these freshly animated soldiers now prey upon the living. They mix in excellently with any other Undead code in the range as well as with box sets like Lady Wintermore's Fangs. Choose from the pack or poses from it. A great place to begin or to boost your collection. Go HERE. 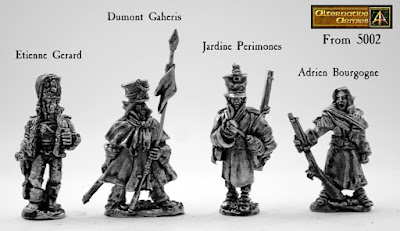 We are getting near to having one of the most popular sets of miniatures ever made for Flintloque back in the world. 5002 Deadloque! Originally Sixteen figures including (as pictured) the hero Colonel Etinne Gerard, Lancer Dumont Gaheris, Private Jardine Perimones and Sergeant Adrien Bourgogne as well as the forces of the Dark Czar in the form of Grigori Dracsul, the Liche Stalinov as well as Zombies and Skeletons. Re-mastering and molding is underway and release will be soon.
But... 5002 Deadloque Miniatures will come back though as Seventeen poses; yes one more. Including a not released before alternate pose (making seventeen in total) the set and as singles will appear in March 2022 and the entire set will have a discount too. If you wish to be informed with the miniatures appear then by all means contact us on email (sales@alternative-armies.com) and we will contact you at that time.
Thanks for Reading,
GBS
Posted by Gavin Syme (GBS) at 08:00