Following up on the release of our new excellent three barrelled cannon, if you missed this go HERE, we are happy to announce the release of the artillery crew for the Army of Pudigrochumsberg. Our last release into the range for the month. This is now online alongside the other codes in this great army of Dogmen which you can see HERE and takes near to the completion of the army with only a few codes still to come this spring. Read on for details of this white metal 28mm miniatures pack. The Pudigroan Artillery Crew! 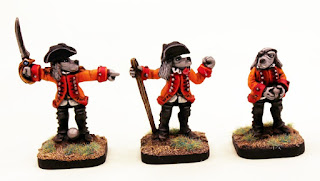 PUDIGROCHUMSBERG FOOT ARTILLERIE
Trained by the finest artillerie masters in Lyonesse the newly formed batteries of the Pudigroan Artillerie have yet to see much action but in small battles against Krautian Dwarf incursions of the Confederation of Finklestein’s territory they have proven more than adequate to the task. The structure of a typical Foot Artillery battalion is as follows. There are five batteries of five artillery pieces each, these are normally medium to heavy cannon and howitzers. These pieces are served by a total of four hundred Dogs composed of gunners, infantry and officers as well as servants and bearers. All serving the guns are designated as Gunners. The gunners are armed with their normal artillery implements with officers having standard pistols or swords as well. The Foot Artillerie uniform consists a dark orange tunic, black breeches, a black shako with silver and a green plume, black shoes. Facing colours (cuffs, collars, etc.) are red. Equipment is black with equipment straps being of white leather. 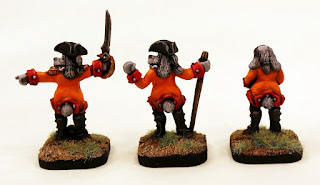 56590 Pudigroan Artillery Crew
A set of 28mm white metal Dogman miniatures which gives you the gunners and limber beasts for your army. These are meant for use with the rest of the Pudigrochumsberg packs but they will also serve well in Confederation of Finklestein collections and also revolutionary older style Ostarian Empire forces. Sculpted by our lead designer Sam Croes there are eight miniatures in this pack six gunners and two limber horses. Go HERE. 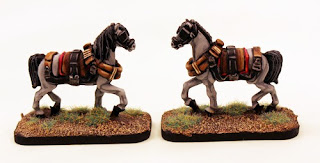 The poses are an Artillery Officer pointing out the direction of shotte and holding a sword, a Gunner with trail spike waving his fist and tongue lolling and a Gunner with sponger ready for use. A Gunner carrying a water bucket who has a wooden leg, a Gunner who is bare headed with an eye patch carrying a cannon ball and a Gunner with lit fuse who is also holding a pistol. Lastly two identical Limber Horses with tackle and trail fitted for use pulling artillery pieces. All are wearing Pudigrochumsberg uniform and most wear a tricorne hat. These Dogmen are all 'poodle' types making them the same average height and bulk as an Elf. They are character filled miniatures that are your gun crew but who would also make excellent additions to an infantry section as well. While they can be used with any artillery piece from our range HERE. They are intended for use with any Ferach guns and remember the 59519 Le Imperiale Trois Cannon or the 'Menage a Trois' three barrelled cannon. You can see it in action with these gunners below. 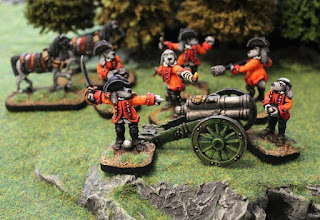 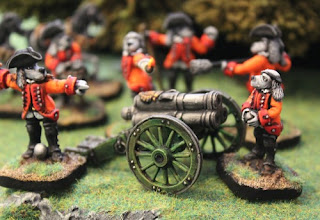 The leader of Pudigrochunsberg the illustrious King Bonio limited edition code has been very popular this year and you can see HERE. 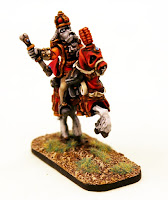 Remember to download the free PDF insert for this king too. Its on the page of the website for the pack.  Thanks for Reading,
GBS
Posted by Gavin Syme (GBS) at 04:50