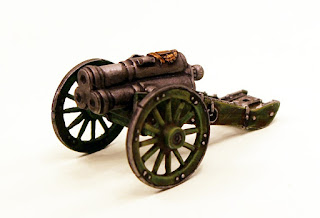 Based on a real 18th century three barrelled cannon held in a French museum Alternative Armies is delighted to announce the release of our 28mm scale resin and white metal kit of this exotic artillery piece. This model can be used in straight historical wargaming or in our own fantasy Napoleonic rule systems such as Flintloque and Slaughterloo. Go HERE or read on for more information. 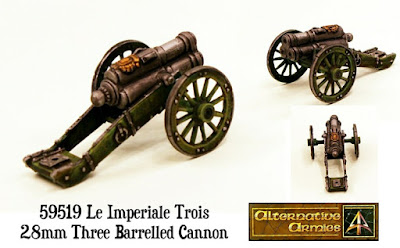 59519 Le Imperiale Trois Cannon
This is a 28mm scale white metal and resin artillery kit. Comprising four pieces which are a resin three barrelled cannon, a resin cannon body and two white metal wheels. Easy to assemble and once assembled measures 60mm long, 40mm wide and 30mm tall. Sculpted by our lead designer Sam Croes and nicknamed the 'Menage a Trois' this triple shot gun is an exotic weapon. As many of our other miniatures we will offer the additional choice of purchase pro-painted and based by our team of ladies here in Scotland. See it and the rest of our Artillery park HERE. It is priced at 6.00GBP. 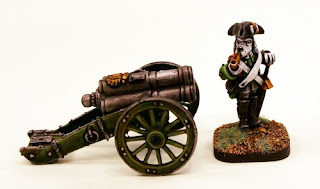 For players of Flintloque and Slaughterloo this cannon belongs to the Elves of Armorica and is used by them and a few select nations in the employ of the Ferach Empire. There are a few with the Dogmen of ruined Pudigrochunsberg.

Le Imperiale Trois Cannon - 10lb
During the dark days of the intercine wars between the High Elves of Armorica and the Dark Elves of Catalucia, a conflict known as the ‘Warre of thee Catalucian Successor’ many new ideas were ferment among the artificers of the Peacock Throne. One aspiring fellow named Hugenvale petitioned the government in Lyonesse with a revolutionary idea for a new type of artillery piece which he named the Imperiale Trois. With copious sheaves of designs all neatly drawn and unrolled across several tables at the Academie Artillerie he outlined his idea.

An idea for a new cannon which would change the world and make it all for his Emperor. A three barrelled cannon. The Imperial Trois caused a storm among artificers all claiming and counter claiming that it simply could be be done, that it was lunacy, that is would never work and would most likely kill all those who tried to forge it or to give fire with it in battle. Early models were extremely dangerous to the gunners who crewed them and several exploded in spectacular fashion killing many around them. It looked like the design would fail without ever seeing the field of battle. However the design was rescued by two changes. The first was to use far more expensive but lighter and stronger brass instead of iron for the three barrel cannon. The second was linked to the first and that was to take several precious Magicke lode stones and to infuse them into the brass to make each cannon partially Magicke in its operation.

With these changes made the Imperiale Trois began not only to work properly but to take to the battlefield and to win several key encounters between the small Armorican Armee and the much larger Catalucian forces. There are few of these three barrel cannons in the arsenal of the Elves and they are saved for Marshals who really have need of them. The Emperor Mordred has personally blessed each of the cannons and to lose one would be...unfortunate for the officer concerned. Currently most of the Imperial Trois are in Diberia awaiting the retreating Grande Armee and of course the following legions of the Dark Czar’s Undead.
(Taken from pg 37 of 5027 Grapeshotte)