Article 7 Looking at the bigger picture by Andy Jefcoate

The wind blows and the sleet falls in winter! The seventh in a series of linked Flintloque articles by Andy Jefcoate about his forays in the Witchlands and in Flintloque. If you want to catch up on the first to sixth articles where he got his starter set and then tried it out followed by a nail biter of a scenario and then get his Pug Dogs marching plus more Cavalry then you can read them on our blog HERE. In this article he expands his future horizon. With pictures of his own painted collection. Read on and enjoy! GBS 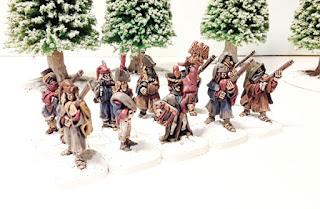 Looking at the Bigger Picture

My eventual plan is to play a game of 'Slaughterloo' set in the Witchlands. There, I've said it, even though I'm several years away at the rate I paint my figures! I enjoy playing Flintloque very much, particularly the narrative nature of the game, but as my forces grow I'm at the point where they are too big for a normal sized Flintloque game, so it's good to have a plan.

With this in mind I'm continuing to build my forces into armies. I started talking about this in my 4th article by consolidating some of my characters into units but this process has continued. The characters I add are mainly the ones that catch my eye and that I want to paint, but every army needs its basic rank and file troopers too. 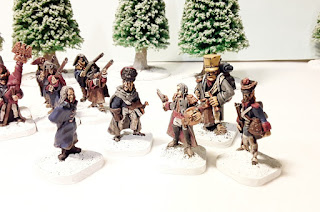 The Ferach Army
With the Ferach force I already have a fair sized Finklestein Dogman infantry contingent with Captain Ludwig Schwarzenbach's 12 dog unit from the Witchlands Dogman (including Hulmutt Jucken), and then the 10 Pugglesberg Jagers plus Captain Wolfe that joined them later. Although these units will expand in time I felt that my Ferach force needed some more elves. At present there are only the 10 Carabiniers including Colonel Gelure, the 5 Witchlands Cavalrymen, and a handful of Elf Witchlands infantry including Ayers and Saindoux himself. I decided that the latter needed to be expanded into a regular infantry unit.

As I've said before, the Elf Witchlands line infantry are brilliant for my narrative as they have varying uniforms and are all wrapped up against the cold, perfect for an Army fleeing through the frozen wastes. Despite their different look, if you want to you can still tie them together as a unit by using a small pallet of colours across all the figures in that unit. I like to do this by using a lot of the blue, grey, red or yellow that I would use on regular Ferach Elf infantry with a few additional colours thrown in here and there. 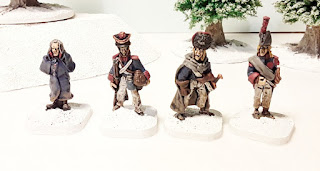 As Hulmutt Jucken joined my Dogman Witchlands unit, Ayers has now joined my Witchlands Elf infantry as their standard bearer. I decided to make them into an initial unit of 10, so I bought 8 regular soldiers from pack 51508 Elf Line Infantry Witchlands. The only thing left was a unit leader so I also bought pack 51006 the 7th Command of the Garde. This pack contains four Elves on foot, an Officer of the Chassuers (Light Infantry), an Officer of the Ligne (Line Infantry), an Officer of the Garde (Line Infantry) and an Agent of the Revolutionary Council (Spy). This last figure can be purchased as 2 different versions with or without spectacles and the kind people at Alternative Armies will supply whichever version you prefer (I got both) if you ask them by email.

I now had a leader for my Elf unit in the form of the Officer of the Chassuers, and for now the others have joined Saindoux as a Command squad. Boell Umfrage has remained with Saindoux too, as his bodyguard.

The Dark Czar's force
My existing troops are great for a beginner as they consist of 14 Savant Zombie dismounted cavalry (including Preserovitch and his men plus 8 Zombiski Cossacks), 5 mounted Zombiski Cossacks, 11 Werewolf Licantzrop Jagers plus their Vampyre leader, then a further 2 Vampyres (1 mounted and 1 on foot) with a Liche. As the undead are all Savant Zombies you don't need to worry about brain freeze or the distance from the Liche.

However, I felt that this force was rather elite and has far too many leaders so would benefit from some regular Zombie Line Infantry as these should really form the bulk of this type of army. I decided to have an initial unit of 12 and as I already had a Vampyre and a Liche, I bought 10 regular zombie infantry figures from pack 55508. 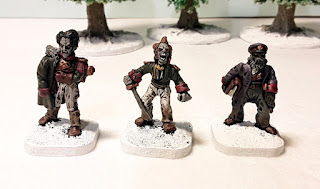 As I mentioned in my 4th article I had already painted a Vampyre from pack 55005 the Latrinislav Command pack who will be the leader of this unit. I have also now painted the other Vampyre and Liche from this set so I have a second command unit ready to go. I do enjoy painting Vampyres! 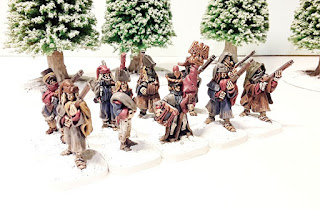 Scenarios
I'm at the point that I don't generally use all of my figures in a single game. This is a good thing. As I said earlier, I particularly like the narrative nature of Flintloque so I concentrate on what a small band of characters is doing at any one time. The result of those small actions then builds into the larger picture of the army itself and influences the plot of other scenarios. Although I decide what scenarios to play you can never truly know what the result will be until those dice start rolling! To be honest I very rarely balance the points of the two forces in a scenario, it is purely about the story which I find to be less clinical and more fun. After a while you get to know what kind of characters work well either together or against one another.

In line with the continuing narrative above, a good scenario is to try to get a small force of Ferach soldiers to the safety of Saindoux's force by passing a piquet line of the Dark Czars forces. For this I like to use my newly painted zombie unit of 12 figures spread out in a line east to west across the middle of a 4' x 4' table (but still within command range of the Liche). A small unit of Ferach troops have to enter the table on the northern edge opposite the piquet line and pass them to escape off of the southern table edge. It is then all about how difficult you want it to be, for example 2 Elf soldiers will find that they are having a very bad day, but a unit of 10 shouldn't have too much trouble getting most of their number to safety.

What's next
I have a huge wish list of Flintloque figures and there are also some great new releases. It's time to place another order and I'll let you know how I get on in my next article.