“It is the winter of 1502 at the court of the notorious Cesare Borgia and while the snows fall outside the great table is surrounded by some of the most brilliant and ruthless men of that age. Among them is Borgia himself, patron and wealth bringing to his table two men among the many who will live on in history. The first is Niccolo Machiavelli who will use Borgia as the basis for his text The Prince. The other is an aged Leonardo Da Vinci whose mind is a wonder filled with designs that will influence a world to come. Employed as a military architect Da Vinci has plans for weapons and machines of war that he has no desire to give to Cesare Borgia. While it is not known if Machiavelli whispered a warning in the old man's ear it is wonderful to dream of what might have been said on those dark winter nights.” - Gavin Syme (GBS)

Sometimes a lovely piece of modelling in 15mm scale really catches your eye and this little build by wargamer Paul Thompson did just that for me this weekend.  Taking the Alternative Armies HOT Da Vinci Tank as his starting point he created a behemoth for use as an element in HOTT 2nd Edition. 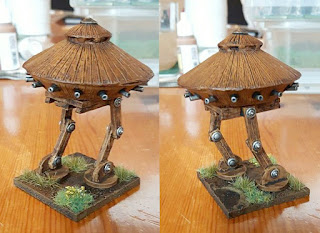 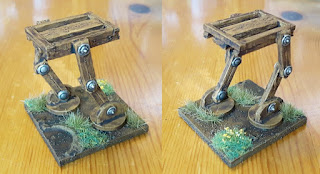 Using a combination of matchsticks (balsa wood) and glue alongside careful cuts and some white metal buckler shields (we have a similar one on the arm of a Skeleton in HOT14) a pair of legs were assembled with a platform upon which the Da Vinci Tank could be placed for play.  A 40mm base as per the HOTT rules for a Behemoth with the great effect of a 'footstep' implanted into the soil of the base.  The tank can be used on its own too.  It is not a complex build rather a piece of artistry and imagination.  Well done Paul! 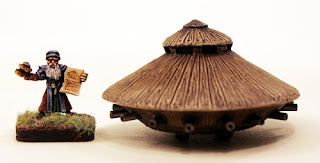 Two packs in the HOT 15mm Fantasy range designed by Sam Croes. While not strictly fantasy these packs straddle the divide between the real world of the Renaissance and the invented world of fantasy. They can be used for both and 'Da Vinci World' is an accepted army list for several wargame systems. We have a true scale 15mm version of Da Vinci's tank, his turtle car, a wooden behemoth and would spread cannon carnage on a battlefield. We also have the great man himself Leonardo Da Vinci on foot and on horseback so you can add him as a character to your games. Fans of Renaissance Warfare, fans of 15mm Fantasy warfare and Furioso HERE. 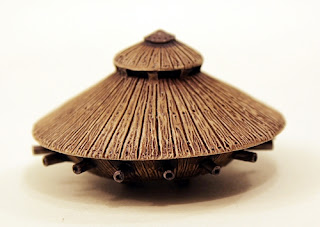 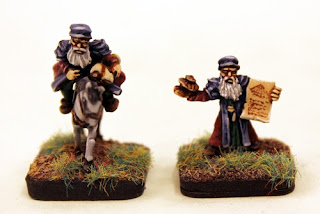 HOT102 Leonardo Da Vinci
This small pack contains three 15mm scale white metal miniatures. The famous inventor, thinker, artist of the Renaissance Leonardo Da Vinci on foot in robes holding a scroll of parchment and a scale model of his Tank (see HOT101) and a horse with a mounted version of the same miniature showing Da Vinci riding.  Go HERE.