Following up on his two article look at the Crystal Elves this time Andy Jefcoate is looking at other Alternative Armies 28mm high fantasy miniatures which can be put into Flintloque.  This time it is the 28mm Wraiths of the VNT Range.  If you missed any of the previous seventeen articles you can see them all for free on the blog by clicking on this TAG.  A variety of adventures in Flintloque mainly set in the Witchlands.  If you would like to Begin in Flintloque visit our website HERE for Escape the Dark Czar and free content and videos.  Enjoy!  GBS 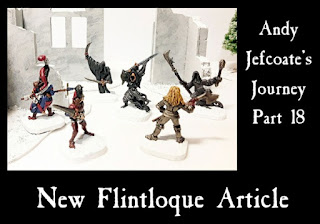 As you will hopefully have read in my last two articles I've been looking through the 28mm High Fantasy ranges on the Alternative Armies website as I had the idea of looking to see which figures would fit into my Flintloque sections either with or without conversion. I have previously explained how I've used various Crystal Elf figures in my Ferach forces or as swords for hire, but until now I hadn't added any figures to the Dark Czar's forces. 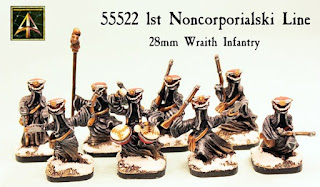 That was until the recent bulk release of the Wraith figures that are available on the Alternative Armies website across the HOT 15mm fantasy, VNT 28mm fantasy and Flintloque ranges. The updated Noncorporialski for Flintloque are great, being very characterful and with a good choice of miniatures (so my wishlist has got even longer). However, I had something more feral in mind for specific scenarios so decided to use the 28mm Fantasy Wraiths which are equally great.

What is available and what did I get
While mounted packs are available and would be very useful I decided to stay pedestrian and look at the Wraiths on foot (not the cavalry packs). These come as four miniatures to a pack for only £8.00 with two packs available, VNT28 Wraiths and VNT43 Wraiths II. As always they can be purchased separately for £2.00 each, or if you buy three identical packs on page you get a 10% discount.

I had to get both packs as the number of weapon options is very good. While I haven't with these purchases, many of the miniatures are suitable for conversion in the form of weapon swaps or as command figures such as a standard bearer (which would be very easy with the Wraith with spear and long dagger). 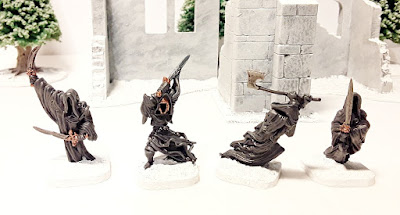 How did I paint the figures
As standard Wraiths in black robes they are very easy to paint. I do this by doing a black undercoat, before heavily dry bushing in a dark grey then putting a black ink wash over the top. This creates lighter areas and shade while still looking like black robes. I particularly like the contrast of the black robes against the snow.

After that I merely painted the weapons, with dull silver coloured blades, gold hilts and brown wooden shafts on the pole arms. These were also subjected to the black ink wash.

Of course you could always paint their robes in a different colour, and I've also found that if you paint metal weapons in a reddish brown colour then dry brush in silver metallic this can make them look rusty. For my Wraith leader, I gave him a gold helmet and gave the sword blade a light blue ink wash to make it look magical, and so that he stands out! 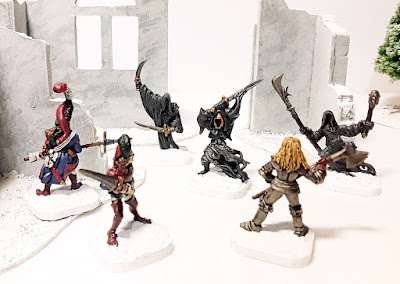 How have I used them in my games
I initially used my wraiths in small numbers in a scenario where Ferach troopers searched an area of ruins for archaic weapons to use in battle. This then dictated what 'the Levellers' from my last article could use in following games. Several counters were placed around the gaming area and turned over as Ferach troopers made contact with them and searched that area. Some of the counters were wraiths using the same stats as Noncorporialski, with one having the stats as an average human sized Vampyre to represent the leader. All other counters had a type of melee weapon listed. As mentioned earlier these Wraiths are more feral than Noncorporialski Wraiths and are simply defending their territory, immediately attacking the nearest Ferach figure.

As weapons are found on the playing area, and as an additional bit of fun a player has to roll D10 and look on the following table when first using that weapon in combat to see how useful it is.

As more of my Wraiths have been painted, I've started to use them as a Flintloque section with the stats listed above. All of them have melee weapons and are fun to use when fighting  'The Levellers' from my last article.

How do they fit in with my narrative
As Saindoux's troops have searched old manor houses and ruins to look for anything that can help them survive, they have angered Wraiths who see those buildings as their territory, especially when items are taken. The Wraiths have now joined the pursuit, gliding across the snow to attack any Ferach troops that become isolated. 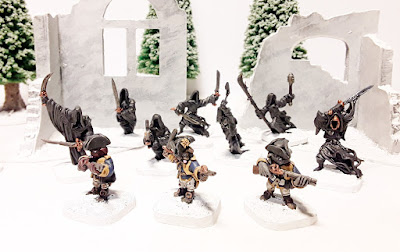 What's next
As always I hope that you've enjoyed reading about my Wraiths and that I've inspired you to get some. They are great figures and fun to use in scenarios. I plan to move back to more traditional style Flintloque figures for my next article and I'll let you know how I get on.