Now released into the World of Valon as part of the Frontear range Alternative Armies presents a dozen miniatures sculpted by John Bell (he of the Sengoku range) in 28mm scale.  The Logann are the first native race of the Amerkan continents and they are detailed in the Frontear game book along with their rules for play. These are all of our 28mm scale fantasy and Flintloque releases for August.  Go HERE or read on for more. 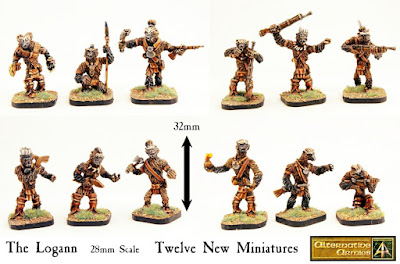 HOME OF THE BRAVES
Like the Macaw before them, the Logann Tribes of North Amerka who resided in the great woodlands of the west had enjoyed a very personal and productive relationship with magickal beings. These, however, were not the blood-thirsty deities of the southern continent, but the less powerful, though more numerous, Spirits of earth, air and water. Respect, rather than veneration, was accorded these beings and their environment, and in return these Spirits educated selected individuals, enabling them to draw on Wylde Magicke and perform wondrous feats. These shamans were able to fly, exert limited influence over local weather patterns, and even shape change when the mood took them. In addition, these learned individuals were also able to pass on lore to members of their Tribes; modest gifts that allowed hunters and warriors to move undetected through the woodland, survive unaided in hostile conditions, and draw briefly on the powers of their woodland neighbours to endow themselves with greater speed, strength and agility as the situation dictated.

Then the tide of annulment arrived on the Amerkan continent and things began to change. The patron Spirits went abroad less often, and grew less inclined to interact with the Logann Shaman; preoccupied, as they were, with identifying the reason for their loss of power and the threat it posed to their very existence. As the Spirits’ powers waned, so too those of the Shaman: flight became impossible; their ability to control weather was replaced by an ability to accurately predict upcoming weather patterns. Useful, but a poor substitute; and the ability to shape change also disappeared, leaving in its wake an empathic bond with the creatures of the forest which was, again, a poor reflection of the greater power. Enough Magicke remained to ensure the Spirits’ survival. The warriors’ abilities remained unscathed, but on the whole the Logann became disenchanted with their lot.

Then the Uropeans arrived, and the Logann’s trail of thought ran along similar lines to the unfortunate Macaw. Surely this could not be a coincidence? Many pointed the finger of suspicion at the settlers, convinced that they had somehow worked some Magicke of their own, weakening the Tribes and their allies as a prelude to invasion. So the Logann retreated behind their stockades and prepared for battle.  The fourth age of Valon was upon Amerka...
(An Extract from 7000 Frontear the Skirmish game book) 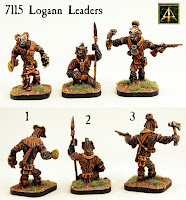 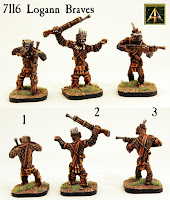 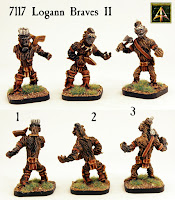 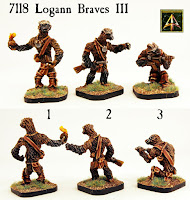 There are four new codes as follows.  Go HERE.

You can select poses from each pack if you desire single miniatures an any amount and you can purchase three packs and save 10%.  All options are on screen.

While meant for use with Frontear you can see that they will fit into Flintloque games too.  A scale picture showing that the Logann are taller and thinner than Elves (such as General Saindoux from 5024 Escape the Dark Czar).  Lithe forest runners. 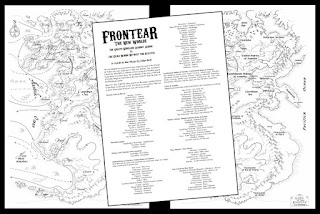 We have another treat for you.  Drawn by John Bell we have the first maps of Amerka!  Two different maps along with a couple of pages explaining place names and their real world equivalents.  Downloads it from our website storage by CLICKING HERE.