It is my great pleasure to show off to you the fantastic personal Ratmen of Joccia force which belongs to Mark Taylor.  He is something of a wizard with a paint brush and takes pride in his Flintloque miniatures with which he plays Slaughterloo in unit formations.  Half a dozen photos each with a story to tell.  If you would like to see the Joccians (who are the Scots in the fantasy world of Valon) then visit our website HERE as page two of the mighty Army of Greate Britorcn. 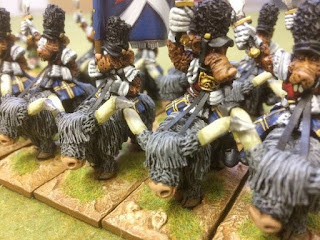 Mark has made some scratch built additions to his miniatures and these add a personal touch.  Lets see what each of these furry fierce kilt wearing soldiers is all about. 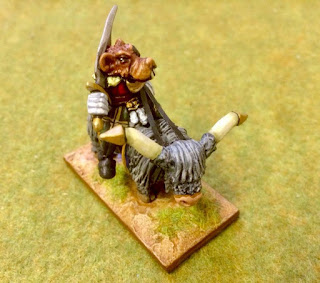 The venerable General Archirat Gordon commander of the Joccians in Catalucia. When he rides to the fore the Ratmen will stand against any enemy!  This is a limited edition pack (LE028) to which reins have been added.  He is painted in the tartan of the 44th Foote. 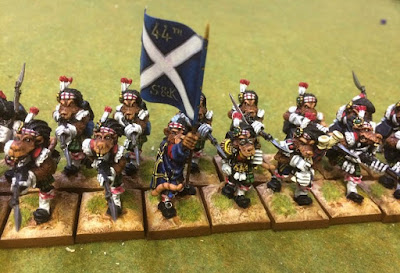 The fabulous fighting Strathcarnage & Killmore 44th Foote who are Highland Rats commonly known as the 'The Furty Fairth'.  A regiment which has fought many battles in Catalucia and in the Goblin lands of Al-Garvey and a firm favourite of General Gordon and of Wheeling-Turn himself.  This is a line infantry code (56502) which comes with troopers as well as an officer and a bagpiper too.  Mark has converted another infamous Joccian (LE014 Angus McBam) into a standard bearer with flag by removing the sword and putting in rod. 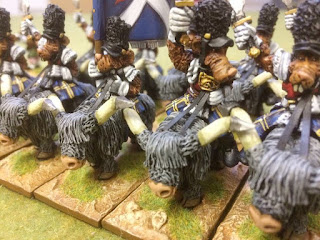 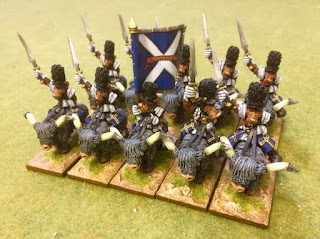 Some of the heaviest cavalry that Britorcn has in its possession.  Known as the Joccian Greys this regiments actual title is the '2nd North Britorcn Hussars' and its troopers ride upon great hairy cows.  They have the reputation of being unstoppable, an image that they more often than not live up to. Sadly, this applies not only to the inability of their foes to stop them when in action, but also to their own General’s lack of control over these over-enthusiastic warriors. Valorous to the point of madness, they tend to believe that they can single-handedly defeat entire enemy armies.  This is a cavalry code (56511) which comes with an officer, standard bearer and trooper poses.  Mark added reins and also a great flag.  The reins look superb! 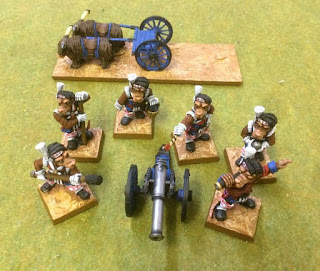 While the Ferach Armee has the greatest Artillerie there are many fine batteries in the Army of Greate Britorcn and the Joccians have their share of these.  Favouring medium guns such as the 6lb or the long 9lb these gunners are found trailing behind divisions in Catalucia.  Mark's guns are drawn by hairy Highland Cows.  The artillery crew is a full set with the two cows (56515) along with an Alliance Limber (5100LT) and long nine cannon (59501).  Mark has done great work here with the paint job. 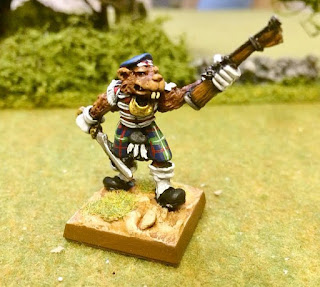 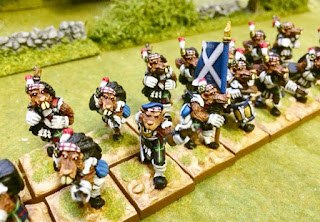 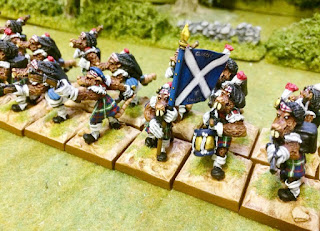 The lowlands and towns of Joccia produce smaller soldiers than those of the highlands and while not as fierce they are steadier and more numerous than their larger brothers.  A battalion of the Glasgee Lowland Line flying the 'Slaytire' flag provide a solid centre to Mark's forces in Slaughterloo.  At the top is the officer with musket and sword followed by views of the whole twenty figure unit from angles.  All taken from line infantry code 56503. 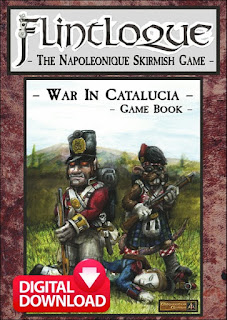 You can learn more about The Ratmen of Joccia in two of our books.  These are 5025 War in Catalucia for Flintloque and 5030 Slaughterloo wherein you read and see their homeland, regiments and characters as well as a lot more.

Thank you Mark for giving permission to share these great pictures.