Army of Pudigrochumsberg free booklet to download for Flintloque and Slaughterloo

“A blackened and burned land is all that remains of the once thriving kingdom of Pudigrochumsberg the victims of the Ostarian Emperor Klaffenhund’s madness.  In an attempt to gain popularity during the Ferach Revolution the Emperor decided to test his newly uniformed in white and musket armed Dog soldiers against this prosperous nation.  The few ready corps of troops that the  Houndian King Bonio of Pudigrochumsberg could bring to battle were scooped up and binned after a few weeks of campaigning.  Klaffenhund the head of the Yapsburg dynasty would accept no surrender and ordered the sacking of every city in their land and sowed salt into the fields. King Bonio and several regiments escaped and sought refuge with the Elves becoming a small force sworn to destroy the Ostarians at any opportunity.  Some Pudigroan soldiers with  Finklesteiner assistance fight on in their  ravaged country in attempts to dislodge the Ostarians unfortunate enough to be assigned garrison duty in Pudigrochumsberg.” - The Ruined Kingdom of Pudigrochumsberg 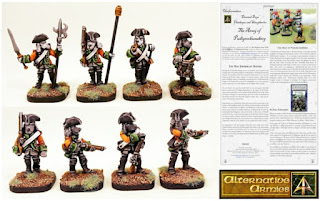 Now online for free download our Army Booklet for players of Flintloque and Slaughterloo to add the Dogmen of Pudigrochumsberg to your games. Skirmishing and Mass Battle statistics plus profiles of main regiments and their uniforms.  As well as this a page on the the part King Bonio took in the Bier Wars after the Ferach Revolution.  To see this army from The World of Valon go HERE or read on for more and to download. 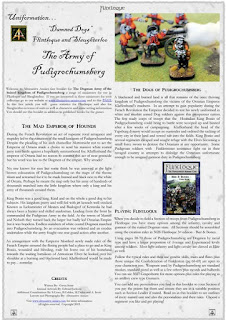 Army of Pudigrochumsberg
A six page booklet containing background for the ruined kingdom and allies of the Emperor Mordred of the Ferach.  Flintloque and Slaughterloo rules and game statistics as well as information on the Bier Wars plus many pictures and a link to another free download too on King Bonio.  A great short read which will slot right into your collection of published titles such as 5028 Bier and Bones and 5030 Slaughterloo.  CLICK HERE to get the PDF from our online storage. 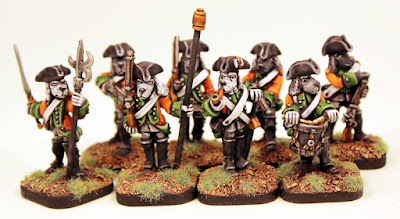 There are more than ten different choices of troops in this Army. Above you can see core favourites 56589 Pudigroan Line and 56592 Cruellest DeVille Cuirassiers which is where many players begin their journey with this force.

If you are wanting to get into Flintloque then of course you should begin by checking out 5024 Escape the Dark Czar in which there are miniatures which work well with Pudigrochumsberg including a Dogman character.  If you are keen on Mass Battle then check out Slaughterloo and the Divisional Army Pack (DAP) for these Dogmen (saving 19% as code 56604).  As with all codes in the World of Valon range you can select a pack, or a unit, or single trooper booster plus the option of purchasing painted and based ready for play when it comes to the Pudigroan Army. 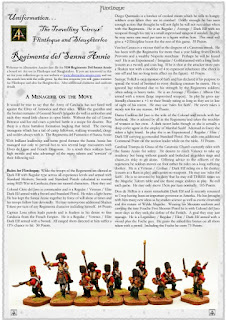 There are a great many other free files at Alternative Armies for download including a great deal for Flintloque such as the insert for the Regimenta Santa Annie and the expansion scenarios for the Escape the Dark Czar beginners set.  Check them out HERE and just scroll down and click on what you want.