Following up on his look at using the recent new VNT 28mm Fantasy Wraiths in your games of Flintloque the series continues with Andy Jefcoate bringing in a new character of his own creation. If you missed any of the previous seventeen articles you can see them all for free on the blog by clicking on this TAG.  A variety of adventures in Flintloque.  If you would like to Begin in Flintloque visit our website HERE for Escape the Dark Czar and free content and videos.  Enjoy!  GBS

The Adventures of Gorgon Lightfoote - Part 1

I've been promising to tell you about the adventures of Gorgon Lightfoote for a while now. He is a Spy Master in the Britorcn Army and leads a group of specialists that volunteered to be sent to the Witchlands to spy on and disrupt the Ferach forces. Once they arrived though they found the Dark Czar's army to be unwelcoming and aggressive towards their small force, so they knew that they were on their own. Lightfoote decided to stay to gather all the information he could about both sides of the conflict in order to better defend the Realm.

This has enabled me to create some interesting little scenarios, and establish a third party with no loyalty to the Ferach or the Witchlands armies. These have initially been small scale raids to capture supplies or personnel for interrogation as Lightfoote's force is fairly small and spread out, but I'm sure he will gather reinforcements over time which I will tell you about. As his force is made up of volunteers it has enabled me to use Orcs, Hob Goblins, Ogres, Rats and Elf Deserters which has been great fun (despite the more complicated section rosters which result). 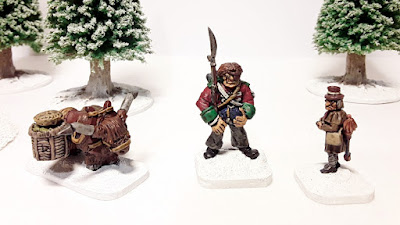 Gorgon Lightfoote
Lightfoote is a Hob Goblin from Taffsea and was a major with the Ram Raiders before his retirement. He was loved by his troops and an excellent tactician which is why he didn't actually retire but was instead recruited into the Britorcn Secret Service where he has risen to the position of Spy Master. While he's not the toughest leader around his intelligence more than makes up for it, although he has some skill with a pistol or blade when the situation calls for it.

For the man himself I've used the Hob Goblin Miser Figure. It's a great casting and Lightfoote dresses in civilian clothes to disguise himself. I have added a sword in its scabbard (from accessory pack BS14) to show that he is armed.

In the game he is a Veteran Hob Goblin Regular Officer armed with a Sword and a Ferach Elf Duelling Pistol. He has the Magicke Talent of Prevent Injury (potent), the Duellist Skill and the traits of Steadfast and Massive Jamminess. 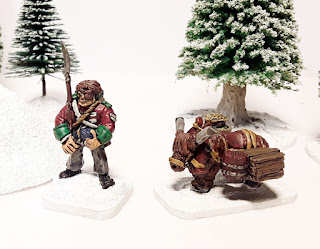 Corporal Fixit
This KGL trooper has been Lightfoote's bodyguard and battlefield companion for many years. An Ogre of few words, his name has come from his habit of saying 'me fix' before sorting out a situation he and Lightfoote find themselves in. The sorting out usually involves someone getting a thumping, normally the enemy but not always which is why his comrades are often wary around him. For Corporal Fixit I've used the 56031 KGL Trooper who looks like a tough old campaigner with his eye patch!

In the game Fixit is a Veteran KGL Ogre armed with an Orc Bessie Musket. He has the Iron Hard and Knuckles traits, and in addition if he is within 3 inches of Lightfoote any wounds that Lightfoote takes can be transferred to Fixit as he throws himself in the way.

Daisy
This Highland Cow carries the supplies of Lightfoote's force and is usually led by Corporal Fixit. I've used 56511L the resin Highland Limber Cow for Daisy with the simple conversion of adding a box and keg one side, and a festoon the other as a basket carrying their victuals, all from pack 5003B. I've put a pie from pack BS001 on top of the festoon to highlight this fact. 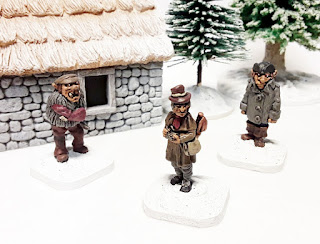 Stab and Grab
If you've read my 14th article concerning the Civilians of Valon, then you've met these guys before. They are former Orc line troopers from the Britorcn Army of Catalucia. In the army their exploits were legendary amongst the rank and file but frowned upon generally by their officers. Comrades in their section never went hungry as their reputation for scavenging and thievery meant that they would always 'acquire' whatever they wanted. Unfortunately they pushed their luck by plundering the baggage of their own general and the rumour is that they were only saved from being hanged by their Major who intervened on their behalf. He saved their lives but they were still dishonourably discharged.

In the Witchlands their real names are only known by Lightfoote who recruited them into the Secret Service and they just use their knicknames of Stab and Grab. They have joined the followers of the Ferach army and are regularly reporting back to Lightfoote on troop movements and interesting events. They get in places that wouldn't normally be possible by hiring themselves to Ferach Officers as additional guards, thugs or labourers. They don't mind if their tasks require a moral flexibility which has seen them regularly called upon during the Ferach retreat especially as units compete with their own side for resources. If more Elves happen to go missing then Stab and Grab see it as one less to fight at a later date!

As part of Lightfoote's force they are used as Experienced Orc regulars. They each carry 2 pistols and have knives hidden all over their bodies. In close combat they both fight with 2 knives but such is their skill they get a +2 melee modifier as if they were using a sword. When Lightfoote's force is attacking a Ferach force Stab and Grab are always deployed last after all other characters from both sides and may be deployed anywhere on the table as long as they are not less than 6 inches from an enemy figure. This is to represent the fact that they are often hired by Ferach officers who think that they are part of their own section! 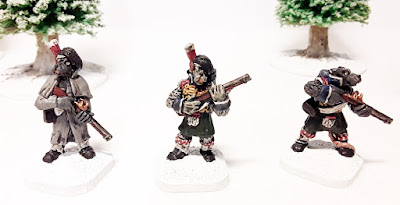 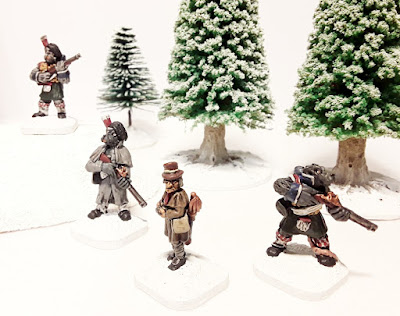 Blacke Watchit
Lightfoote's escort are composed of Highland Rat Blacke Watchit troopers from pack 56533 armed with Bessie muskets. They are highly thought of troops within the armies of Albion and the importance of Lightfoote's mission is shown by the fact that these elite troopers accompany him. They are tough in a fight and good shots so are solid troops in any situation.

What's next
As always I hope that you've enjoyed reading about Lightfoote's band. In this article I've given you details of the core of his section, and in future articles I plan to expand his force and tell you about some of his adventures.