With the classic Erin range fully returned to the website and CM26 Streng hero of the Fir Bolg released we now begin our regular releases into the range which will continue each month.  The first female and first missile weapon armed Fir Bolg to join your warband to battle the evil Fomorians, the magical Sidhe or even the mere mortal Milesians.  Now eighty seven miniatures in the range HERE. 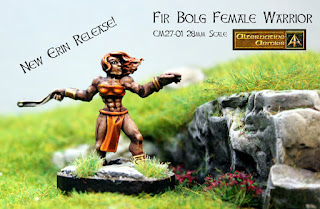 There are now a dozen Fir Bolg miniatures with ten being warriors and one named hero.  We aim to expand the people of the bag to a full faction with a value warband such as that we have for the other races by the spring. 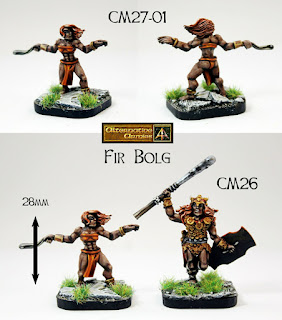 A single Erin metal miniature supplied unpainted, unassembled (if required) and without a base.  See CM26, CM20 and CM21 codes for other Fir Bolg. 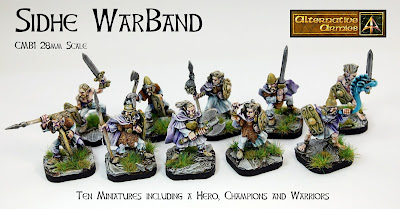 We currently have three Warband saver packs which give you a group of miniatures including a hero, champion and warriors for your choice of faction with one miniature free (10% off single prices). 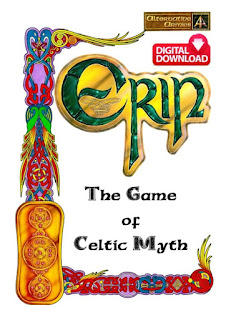 By customer request a paid digital download the 2005 game book for Erin Celtic Mythology.  This book has been out of print for several years and will not return in print as we are working towards a third edition.  This edition is far, far off and thus this title is offered at a much greater reduction as a download to tide you by until then.  See it in the Erin Range or among the array of Digital Download Books on the website.

Erin 2nd Edition has an easily learned 2D6 based rules system that is scenario driven with a normal game lasting between one and two hours in play. The game book features full rules, no need for expansions, create and advance your characters and creatures using a full points and warband and hero generation system. Also a full Druidic Magic system and all needed rules for Chariots, Horses, Gods, Enchanted Animals and Monsters. A full and detailed narrative of the history of Erin and sections detailing the nature of each of the five main peoples of Erin. Includes three made scenarios and a short section for inclusion of a fictional Roman Invasion of Erin. Generate scenarios, the landscape and even the weather and then use the mini campaign section to manage your warband between games.  (106 pages.  With a few pages removed and reordered).