It is our great delight to reveal the first release of 2022 this January and its the first of a great many returned classics.  Added to the Tabletop Miniatures 15mm Range (which contains both Tabletop Games and Asgard 1980's miniatures) the Flying Reptile with Wraith Rider.  There are now some sixty five miniatures returned in this range which covers Dungeon Adventurers, Dwarves, Undead, Monsters, Creatures and more.  There are also some great value saver skirmish packs. 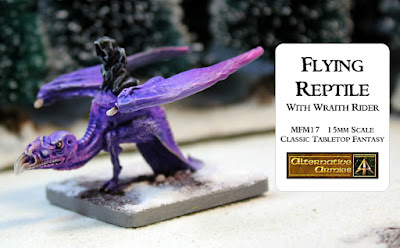 MFM17 Flying Reptile with Wraith Rider: A denizen of pure evil rides upon a creature that feasts upon the flesh of the dead and living alike.  This code contains one 15mm scale model in three pieces these being the body of the reptile, the wings of the reptile and the sitting wraith in robes.  The assembled model is 60mm long and 40mm wide at longest and widest points.  You can choose from the pack or you can select the creature on its own or the rider on its own. 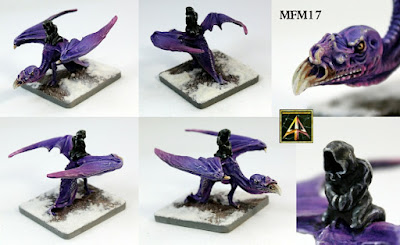 Supplied unpainted and unassembled.  Sculpted in the early 1980's and an original Asgard code. 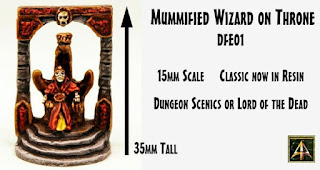 The mummified wizard on throne now re-mastered into resin with a lower price is a great 15mm scale piece for your collection.  See it in the Tabletop 15mm Fantasy range.

This is our sole 15mm fantasy release for the month at Alternative Armies.