Brickdust is the colour of red used by the British Army during the Napoleonic Wars and we have chosen it as the name for the 15mm scale metal range of miniatures originally released in the 1980’s by Tabletop Games. This is a classic range present in the collections of wargamers all over the world. The range is true scale 15mm meaning total figure height of 15mm.   Go HERE and browse or select by nation. 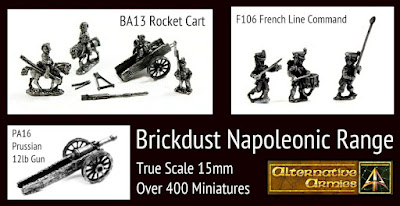 Every miniature is a single piece or small colour section meaning armies can be composed for any skirmish or battle level rules system.  Choose from the infantry, cavalry, command, artillery, gun crews special units, irregulars and personalities of many nations.  France of course (line infantry command above) as well as Great Britain, Austria, Prussia (12lb Cannon above), Russia, Bavaria, Brunswick plus Portugal and Spain.  Also Naval Landing Party, Wagons, Draft Animals and Rocket Troops (above).

We have been told by new and long term customers that the Brickdust Range offers excellent value, choice and works well with our range of BASES FOR MINIATURES which includes element bases as well as square, rectangles, circles in resin and metal types.

While the range currently has something around four hundred and thirty poses it is not being actively expanded.  However we are open to suggestions for new miniatures in the Brickdust range.  So if you would like to see a certain general or regiment or army we would like to hear from you.  Contact us on sales@alternative-armies.com with your suggestion and we will come back to you.

Thanks for your Time,