By players request and following up on the re-mastering of 5002 Deadloque Miniatures Set and the adding of a seventeenth pose never seen before as well as updated Flintloque 3rd edition character stats for Gerard, his Elves and Gerard with his Zombies (see our Free Downloads page for this and a lot more) another wee article on the miniatures. 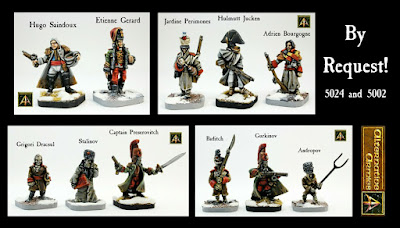 How do miniatures some twenty plus years apart in the Flintloque range compare?  5024 Escape the Dark Czar is the inheritor of Deadloque taking place in the same damnedable dead march out of the snow clad Witchlands.  So you asked..here you go (click to enlarge): 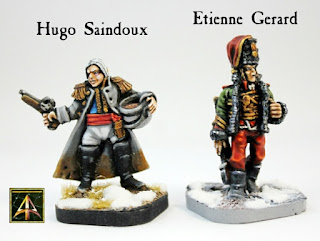 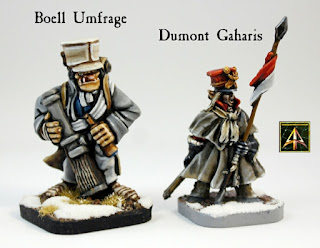 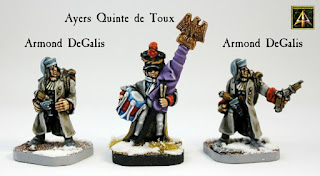 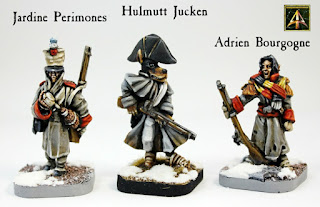 General de Brigade Hugo Saindoux led the 5th Brigade of the 1er Armee du Norde until it was routed and all but destroyed. He did have a private staff of three just to cook his meals but they are gone and all Hugo has left is a family heirloom a cooking pot which he refuses to leave behind. He is beloved by those who follow his leadership.

Soldat Ayers Quinte de Toux.  The contrast between the general and the only other Elf in the small group of survivors could not be more stark. Only a boy Ayers joined the 9eme Regiment de Ligne after a recruiting party came to his village outside Lyonesse.  He was starving.

Soldat Hulmutt Jucken is an embittered soul. The eighth in his mothers litter the world has not been kind to him. There was little to go around in the smokey hut that the pup called home and he could not wait to escape. The Army of the Dutchy of Neuterstadde was small just like the dutchy and it was called in its entirety for the Grande Armee du Norde.

Captain Boell Umfrage. A soldier of some experience who had served with Marshal Sault in Catalucia before joining the Grande Armee du Norde and marching for the Witchlands. Skilled in hunting and in scouting Boell was in the process of ranging ahead of the rest of his regiment when the hammer of the Dark Czar’s ambush fell. He is the only survivor of a hundred Ogres who fought several hundred Zombies to a standstill. 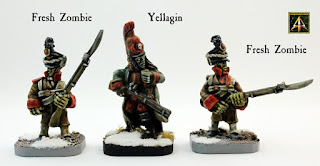 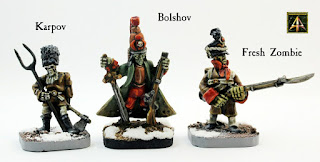 "The past is dim for the captain. Within him he feels a life that he no longer knows. Like a vice the hand of the Dark Czar is in his mind but now and again he remembers the smell of flowers though none grow in the Witchlands and the auburn hair and smile of a girl he does not know. He knows the art of war and of being a cavalryman. Unknown to the Captain and to the other Zombies they used to be troopers in the 23rd Regiment of Cuirassiers in the Army of Armorica and it was for this reason that they were lifted from the blood soaked ground and carefully reanimated to serve as cavalry once more. New names and goals but the same retained skills. Now on foot and with muskets taken from those who no more need of them the Zombies stalk the mortals."

The Zombies lack individuality (not a surprise but rather sad when taken with the above) in their ranks apart from a few such as the Savants in 5024 and long term notables such as Baditch.  Their sections are led by a Vampyre such as Grigori Dracsul and watched over by a K.G.B Liche like Stalinov who keeps order.  This is all explained in 5026 Death in the Snow game book.  Captain Preserovitch leads 'smarter zombies' who do not need a Liche and you can also find them as mounted infantry in their original role as cuirassiers. 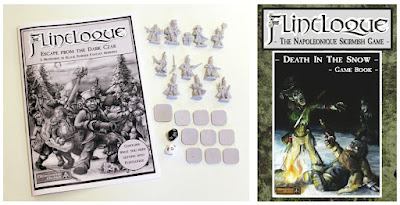 If you would like to get into Flintloque then the great value beginners set is the place to do it.  Go to Beginning in Flintloque for the set as well as expansions and free material to read and download.

Despite the two decade difference in age it has been very satisfying to see and hear from Flintloque players that these newer resin miniatures fit right in with the metal ones.  We have had a number of Flintloque fans ask for a crossover full length scenario featuring both heroes.  I have some ideas and it might happen during 2022.  If you would like to read about the day that Gerard meets Saindoux do let me know.