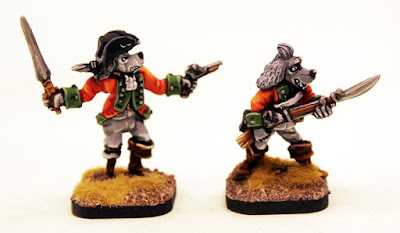 The Dogman Army of the Ruined Kingdom of Pudigrochumsberg for use with Flintloque and Slaughterloo is heading towards its completion in April 2016 and while there are more releases to come including a Command Set and Heavy Cavalry plus of course a whole Divisional Army Pack (DAP) this time we are all about characters. Alternative Armies is proud to present two named character miniatures for use in your Pudigrochumsberg line infantry!  We also have the game rules for them and some brand new artwork by Edward Jackson too.  Go HERE or read on for details of our last World of Valon release for March 2016.

56125 Fauster and Von Smultz
This pack contains two different 28mm scale white metal Dogman characters to be added to our skirmish sections or your army. Meant for use with the rest of the Pudigrochumsberg codes but they will also serve well in Confederation of Finklestein collections and also revolutionary older style Ostarian Empire forces.  The characters are Major Fauster who is holding and sword and pistol an officer of the line infantry who has a wooden leg and Private Smultz who is holding a musket with bayonet and charging forward tongue lolling in the breeze. Both are dressed in the uniform of the 56589 Pudigrochumsberg Line Infantry miniatures.  Go HERE. 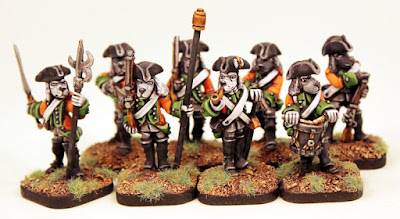 Read on for game statistics for Flintloque and Slaughterloo and Artwork too. 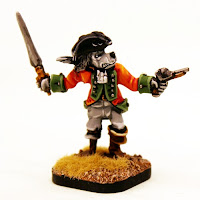 Major Fauster
A soldier since the weeks before the Ostarian invasion of his now destroyed homeland, Fauster has survived injuries that rightly should have killed him.  He is missing his right leg and several fingers from his right hand due to three musket balls fired into him by an Ostarian Chasseur.  While on a filthy cot he heard a voice, from a disembodied source, offering him life in return for service.  He agreed and now his darken overlord keeps him safe in return for taken lives he desires. In play Fauster is an Experienced / Regular Dogman armed with a sword and a standard pistol.  He moves at 25% less than regular rates due to his missing leg but all shots aimed at him suffer a -20% modifier due to strange headaches those aiming at him suffer.  On the first turn of a game randomly roll 1D10 and count the resultant number of enemy characters in from the left of the table.  The selected character must be fought and killed by Fauster in game over all concerns.  If he fails to kill the target Fauster suffers a -1 to Steady in the next scenario he features in.  With these abilities and weapons he costs 37 Points. 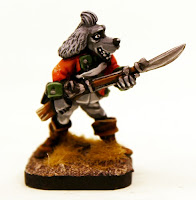 Private Von Smultz
Depite seeing some truly horrific acts of war and barbarity at the hands of the Ostarians, this soldier is constantly happy and wags his tail in joy each and every day.  This makes him popular with his fellows and well liked by his commander but its a time bomb waiting to happen for Von Smultz is actually...very deranged. In play this character is a Raw / Regular Dogmen armed with a Standard Musket and bayonet.  He acts as normal in play until the first time he is engaged in melee combat.  Whither he wins or loses roll D10 after the first round of melee and on an odd result he goes into a state of shock and falls to the ground twitching for the rest of the scenario. On an even roll he goes crazy and will attack the nearest character (friend or foe) continually until he is killed or knocked out.  With these special rules he costs 8 Points.

These characters feature in the 5028 Beir and Bones Flintloque 3rd edition book.

Fauster and Smultz
(Special Character Officer)  (65 Points)
Dark Overlord of Madness: Leading from the front and with his somewhat deranged fellow next to him Major Fauster and Private Smultz are inseparable.  Bound by an evil oath to a dark lord which keeps them alive despite constant danger in return for carrying out horrid acts upon demand.  In battle any unit making ranged fire against the unit these two miniatures are a part of suffers a -2 to its Fire Mod due to headaches that seem to come from nowhere.  You may only use these two characters in one unit of your army and they must both be in the same unit.  They are at home in Pudigrochumberg Line Infantry units but may be used with any Dogman race that is allied infantry unit.  Remove a trooper from the unit if the size maximum for the unit is going to be exceeded.

You can find 5030 Slaughterloo 2nd Edition on our website. 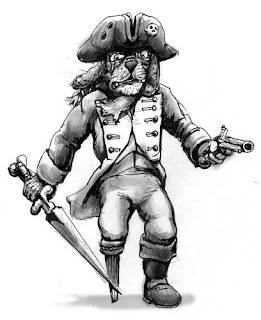 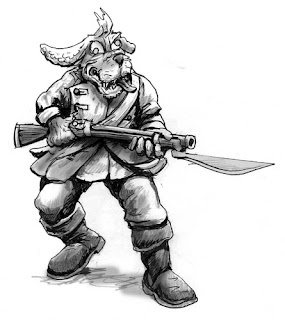 One of the most fantastic aspects of the World of Valon is the artwork which captures the imagination and the humour of the setting so well.  The talented hand of Edward Jackson (Jackorc to his friends!) has illustrated all of the Flintloque 3rd edition books and Slaughterloo 2nd edition as well as other titles too and while his work can be seen in print we wanted to show you two pieces which are brand new.  These are taken from a range of artworks for the Pudigrochumsberg Army depicting the miniatures and also conflicts.  Above is Major Fauster and Private Von Smultz.  Great work Edward!