Ever since I was a wee nipper reading his first history books (and playing with miniatures) I remember one of the most, at least to me, astounding meetings of all time.  That being in late July 1502 at the city of Urbino in Italy three titans of history (two of which on a world stage) came together ever so briefly.  Leonardo da Vinci by then an older man met the youthful Niccolo Machiavelli and the warlord Cesare Borgia.  An eye at that moment might have seen them all in the same tent or on horseback next to each other.  From there history took them in different directions but so many possibilities were in the air right there and then it is very attractive to the wargamer. 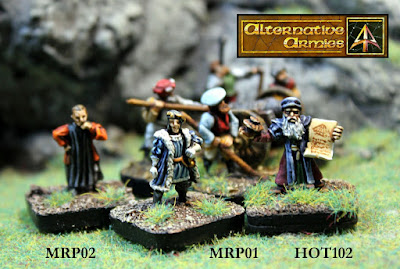 When Alternative Armies began to work with Stephen Danes on what would become Furioso the period of the Renaissance and indeed the Italian Wars were of prime interest to me.  The meeting of the three were foremost in my mind and there was no doubt that these personalities would become 15mm scale miniatures.  As well as creating more than forty new Landsknechts (after all these fellows are central to the period), new artillery and the Da Vinci Tank (which never happened in history but was made for TV in the USA) we first made Da Vinci and then Borgia and then he of 'The Prince' and a word in language itself Machiavelli.  For greatest use they are on foot and on horseback too. I was greatly heartened by the positive response to these miniatures. 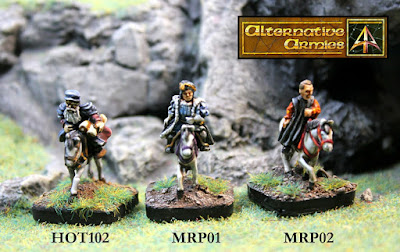 While information on the meeting is vague and indeed Leonardo makes only one reference to it in his notes it is mainly from Machiavelli that the details come.

"The book starts in June 1502 when Cesare Borgia swept through and conquered the northern section of central Italy - the Romagna (from Bologna to Ancona). This raid also put Florence in jeopardy, since they could see themselves as next in the territorial ambitions of young Cesare (then aged 27). So Machiavelli, aged 33, and another negotiator (Francesco Soderini) were dispatched by the Republic to try and negotiate with Cesare. During these negotiations a pawn was offered: the unemployed and eccentric Leonardo, who was already 50, would be assigned to Cesare to assist him in his military engineering requirements."

You can seek these out yourself but for a quick and excellent resource see page 111 onwards in Paul Strathern's book 'The Artist the Philosopher and the Warrior'; well worth owning.

Our 15mm Renaissance range will continue to expand over coming months with another personality and more troops too. Mr Danes is working on the third book in the Furioso series which will be all about The English Civil War (ECW) and we will bring you news of this when the time comes.  Note though that this is in its early testing stage.

Thank you for your time in reading this little thought and as always for your support.