“It did not take long..well it would not considering all the skirmishing and battles we fought...for the legions to gain their share of veterans among the ranks.  Useful Nains who could be put among the short beards to steady them in the line.  By the time of Fassbier and its carnage I felt all the better for having steady troops.  It was a shame there was only grog to drink..bloody Orcs..but they thought they were doing us a favour I suppose.”  (Major Ulf von Slackblatten 1st Legion de Nain) 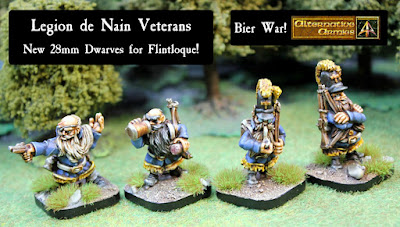 Now that the three main parts of the Legion de Nain infantry are released (line, light and grenadiers) and the classic packs re-mastered, we have a treat and that is the first of the more personality driven specialist pack codes.  Legion de Nain Veterans!  Four Dwarves in poses to mix into your force; each a character.  The legion has doubled and then doubled again in size and you can read all about it on our blog using the Bier Wars TAB. Go HERE for the Confederation of Finklestein on the website where all these miniatures reside. 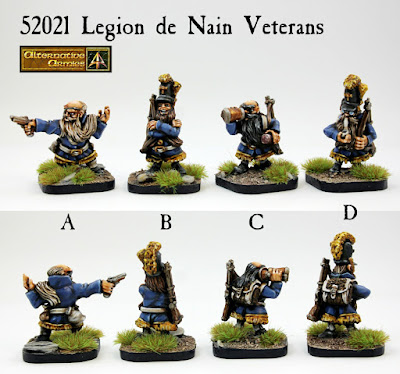 52021 Legion de Nain Veterans: This pack contains four different 28mm scale metal Dwarves which are at home anywhere in the Legion and ideal to mix into your sections and units.  Choose from the pack or select a pose from the pack (A to D). All are dressed in legion uniform. They are a bare headed Dwarf with eye patch aiming pistol ideal for section command or duelling (A), Dwarf arms folded head back laughing with musket on his back (B), bare headed Dwarf drinking from a opened bier stein and holding half of a large cured sausage (C) and Dwarf in glasses in process of lighting a long stem pipe (D).  All have extra equipment on their belts and backs.  Go HERE. 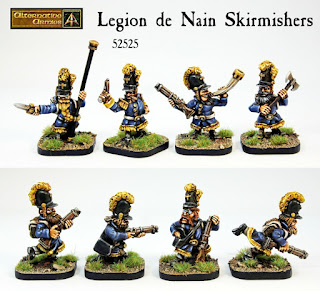 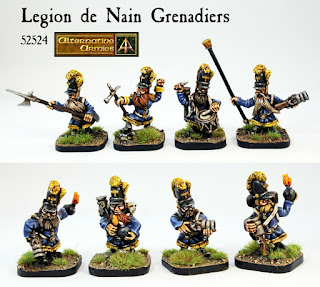 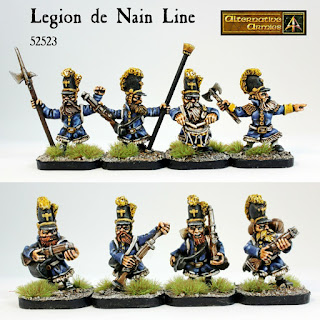 As we progress more releases will happen monthly as we expand the Legion de Nain and work towards it as a full force of all arms (the biggest ever expansion to the miniature range for a single army) we will also be slowly putting together a Flintloque campaign book on the Monich Bier War too.  There are now forty two different Dwarves in the Legion.

If you would like to get into Flintloque in the lands of the Dwarfs then look no further than 5028 Beir and Bones game book.  On its own with full rules in print or as a digital download or as a shilling starter pack with miniatures and scenarios.  Go HERE.

If you have any questions please contact us on sales@alternative-armies.com and ask.

This is our last release for the World of Valon and all else this month we hope you like it.