Let me begin with a wee apology...I had hoped to give everyone new pictures of these classic ranges but it was not to be...but we did get one lovely painted miniature to show you which we now present! Two 15mm scale historical ranges in production at Alternative Armies which came from Tabletop Games the Pony Wars and Potomac ACW do not often get mentioned by us.  Great for any game system set in 19th century North America in this scale. 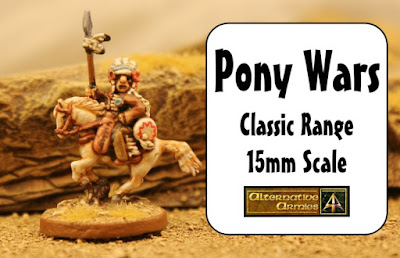 The Pony Wars Range HERE contains native americans mounted and on foot as well as gunfighters, townsmen, women, miner and more for a total of twenty different poses.  Above is PW1 Indian Chief on Horse.

The Potomac American Civil War Range HERE features both the Union and the Confederacy with typical infantry plus the Iron Brigade and Zouves.  Cavalry for both sides plus artillery crews.  There are also dismounted cavalry and civilian irregulars plus generic and personality command.  A selection of artillery pieces and limber. About sixty poses in total. 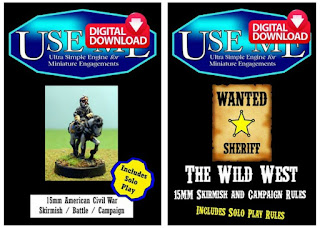 We have a couple of USEME series ultra simple rule booklets which cover the American Civil War and the Wild West as paid digital downloads which are twenty percent cheaper than in print.  See the whole series of titles HERE.  Both have solo play ability as well.