The Italian Wars of of 1494 to 1559 is a fertile place for wargaming and for historical flavour with giants of history such as Leonardo Da Vinci, Cesase Borgia and Machiavelli living as the city states as well as the French and Hapsburg battling for control and dominance.  Alternative Armies 15mm Renaissance range puts you in control of those armies as it continues to expand.  This time new early 16th century Italian Pike and Armoured Infantry. Go HERE and have a browse through pages or define by period. 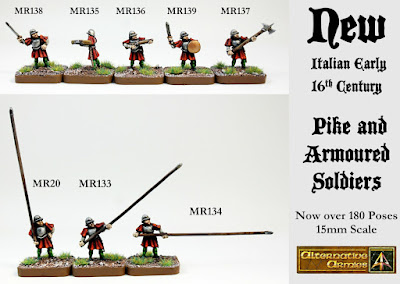 The range covers the late 15th century to the 17th century primarily focused upon Europe but there is also an entire Ottoman Empire selection plus artillery, buildings, tents and more such as foot and mounted personalities.

The new codes are as follows and you can find them on page two of the range or by seeking the codes in the search box.  They fit in nicely with any city state or mercenary army fighting in Italy: 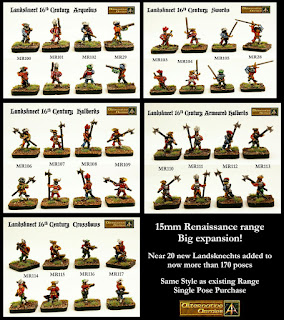 During 2020 and 2021 we added over fifty new miniatures for a Landskecht Army including infantry armoured and unarmoured with a variety of weapons as well as cavalry and command sets foot and mounted.  An artillery crew, Organ Gun and Handbuchse Light Gun as well.  All of these can be found on the LANDSKNECT search tag and the ARTILLERY tag in the range. 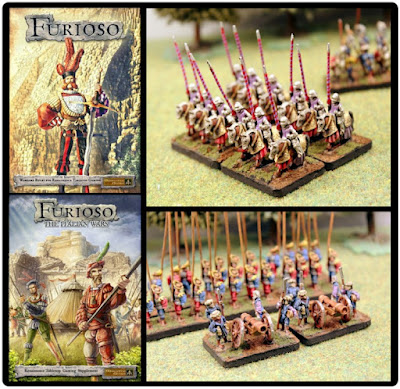 Written by Steve Danes the popular Furioso rule system allows you to fight battles in the 16th century with any scale of miniatures and five settings and army lists.  It has a supplement 'The Italian Wars' which gives extra material for mercenaries, historical scenarios, solo play rules, solo campaigning, blessings on troops as well wondrous inventions and outrageous artillery and other 'fantastical' sections dealing with 'what if' Da Vinci's war machines had actually been reality.  Both books in print and as paid digital downloads plus we have pre-made army packs which have a saving and include free element bases.

Out HOB1 Human Starter Settlement is a great way to put quirky 16th century style buildings on your gaming table with a saving.  Find this and buildings and tents as singles in the range.