Now back in print a new run of the classic battle level rules in the Laserburn universe written by the late Richard Halliwell.  Imperial Commander in stock at Alternative Armies alongside Laserburn and Advanced Laserburn books.  Go HERE for the range or read on. 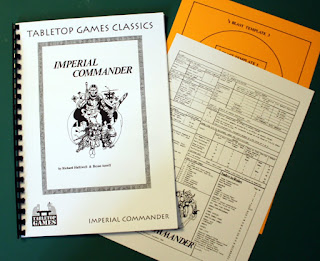 Squad level using army lists for Imperial, Redemptionists, Law Officers and others at about fifty figures a side.  While meant for 15mm scale it can be used in other scales with ease.  A thirty two page book which comes with two separate card sheets for quick reference and blast markers.  A 'classic title' re-print in A4 upsized from the 1981 original A5 booklet. In print only and no digital download version. 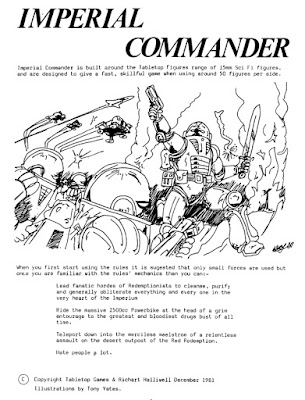 Easy to put into play and if you have a collection of Laserburn miniatures or others you can easily get into Imperial Commander.

We have been asked if we will produce 'army packs' for Imperial Commander as we have done with value packs and game pack with book for Laserburn.  We may well do this and if you have any ideas for an army you would like to see made up from the existing range (such as Imperials from the '300' series of figures) then do let us know on sales@alternative-armies.com. On another front we will continue to restore the books for Laserburn and also Combat 3000 as time proceeds.  If you have a title you wish to ask about then by all means contact us on email and we will let you know its status.